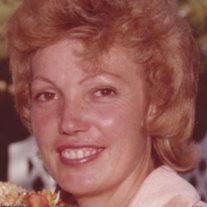 Helen Ferre Perry, aged 75 of Springville, Utah, passed away at home on February 14, 2014 surrounded by her family. Helen was born September 6, 1938 in Vineyard, Utah to Noal Ferre and Caddie Agness Pace. She was the youngest of 12 siblings. Their life on Grandpa Ferre’s farm (now the current UVU campus) was full of hard work and endless fun. Helen loved being with her siblings and looked up to them all of her life. Following her education at Lincoln High School, Helen married her sweetheart, Clinton Longhurst Perry on October 15, 1955 in Provo, Utah and was later sealed in the Manti Temple on October 15, 1966. Newly married they moved to San Diego, California for Clinton to serve in the US Navy and loved their time there. When Clinton’s service in the Navy was complete they were happy to return to the mountains and valleys of Utah and especially to their loving family members. Clinton began a lifelong career in construction in both Utah and Arizona and Helen became an expert homemaker, wife and mother. Together they raised four children in Provo, Utah and later in Scottsdale, Arizona. While in Arizona, Helen pursued an education in doing what she always loved—serving others. She became a Certified Nurse’s Assistant (CNA). She worked in multiple hospitals and nursing homes in the Scottsdale area helping those in need until her own ill health forced her into retirement. After Clinton passed away in 1998, Helen moved back to be with her family in Utah, living in Springville for the past 10 years. Helen was a faithful member of The Church of Jesus Christ of Latter-day Saints. She served in many positions in both the Primary and Relief Society organizations. Helen was involved with the Cub Scouts and Boy Scouts. She was the primary reason her two boys followed the Perry family tradition of receiving their Eagle Scout award. She put a high priority on and was very involved in her children’s education. Helen also served as PTA president at Sunset View Elementary. Helen loved to be active, read, and play games. Her favorite activities were ceramics, bowling, dancing, baking and spending time with her family. Many of her passions have been passed down to her children. Helen was a wonderful mother, wife and friend. Even though her life was beset by many physical ailments she never complained and still constantly thought of others. Although she will be dearly missed, we know she is with loved ones. How fitting she returned to her eternal companion on Valentine’s Day. Helen is preceded in death by her parents, two brothers, three sisters, and her husband Clinton Perry. She is survived by her sisters Ruth Mace, Dora Ashby, Hazel Bowman, Valeen Giles, Marie Young and brother Lawrence Ferre; her children Evan (Kathryn) Perry of Provo, Utah, Lyle Perry of Phoenix, Arizona, Starla Workman of Springville, Utah and Cheri (Brandon) Bigler of Pleasant Grove, Utah; 8 grandchildren, 4 great-grandchildren, and many nieces and nephews. A private family funeral service will be held on Saturday, February 22, 2014 at 11:00 a.m. at Berg Mortuary, 185 East Center Street, Provo, Utah. Friends may call at the mortuary from 9:30–10:45 a.m. Interment will be at the Provo City Cemetery, 610 South State Street, Provo, Utah. Condolences may be sent online at www.bergmortuary.com.

Helen Ferre Perry, aged 75 of Springville, Utah, passed away at home on February 14, 2014 surrounded by her family. Helen was born September 6, 1938 in Vineyard, Utah to Noal Ferre and Caddie Agness Pace. She was the youngest of 12 siblings.... View Obituary & Service Information

The family of Helen Ferre Perry created this Life Tributes page to make it easy to share your memories.

Send flowers to the Perry family.