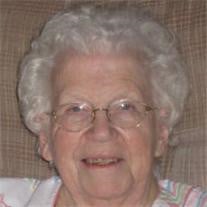 Helene Adele Haugan Manookin, beloved mother, grandmother, and friend, passed away peacefully at her home February 24, 2011. She was born November 12, 1923 in Salt Lake City, Utah, the eldest of four children born to Adele Bertelsen and John B Haugan. She became the mother figure in her household at age 13 after her mother died, and was instrumental in raising her siblings. Helene was an active member of The Church of Jesus Christ of Latter-day Saints throughout her life, and served in many callings and positions in the wards and stakes where she lived. She married Robert P Manookin on May 11, 1951 in the Salt Lake Temple, and counted the four children from his previous marriage as her own; she bore five children, making a blended family of nine siblings. She never differentiated between or favored any of the children in the family, but loved all of them alike. Helene counted as among the highlights of her life the four LDS missions she served with her beloved husband, in LDS Temples in New Zealand, Australia, and the Philippines, and as proselyting missionaries in England. Her lifelong example of faith is summed up in her motto, “The Lord is in charge.” She made friends and loving relationships wherever she lived and served throughout the world, and cherished those friendships throughout her life. Always willing to serve and give of herself, her circle of love extended to all around her, whether lifelong friends, neighbors, or strangers. Her family and extended family has always been precious to her. One of Helene’s sisters (Betty), her brother (Johnny), her parents, and her husband (Robert) preceded her in death. She is survived by her sister (Joy), her nine children – Robert Jr (Shirley) Manookin, Jean (Ron) Garbett, David (Sharon) Manookin, Donald Manookin, James (Irene) Manookin, Marie (Robert) Jensen, Richard (Ellen) Manookin, Edward (Yvonne) Manookin, and Barbara Hill – and numerous grandchildren, great-grandchildren, and several great-great-grandchildren, all of whom she was always very proud. Funeral services will be held at the Suncrest 2nd LDS Ward building, 140 N 400 W, Orem, on Friday March 4, 2011 at 11:00 AM; friends and loved ones may also visit Berg Mortuary in Provo, 185 E Center, Thursday March 3 from 6:00 to 8:00 PM, or Friday morning between 9:30 and 10:45 AM at the Suncrest 2nd LDS Ward building, prior to the funeral service. Condolences and expressions of feelings for Helene may also be expressed online at www.bergmortuary.com. Interment will be at East Lawn Memorial Hills cemetery. Helene’s family expresses heartfelt appreciation to the staff of Love Healthcare for their dedication and caring service over the past many months of Helene’s declining health. They say they aren’t supposed to have “favorites” but without exception, all of the aides, nurses, counselors, and others of the staff who cared for Helene treated her as if she was their own mother and grandmother, with exceptional tenderness, compassion, patience, love, and dignity.

The family of Helene Haugan Manookin created this Life Tributes page to make it easy to share your memories.