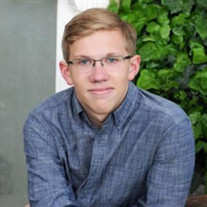 Herbert Hardy Black was born October 28, 2004, on a crisp fall morning. He left us on March 8, 2020, on a rainy Sunday afternoon. He left, but he is still with us. It is common practice in obituaries to use the past tense when describing the person who has graduated from life here on earth, but because we know he is still so very real and present, that will not be the case here. Herbie is only 15 years old. His decision to take his own life−a life filled with so much promise−was unexpected and a shock to all of us. We love him so much, but depression is debilitating and can often mask what is truly there. We miss him so deeply, but find solace and peace in the absolute knowledge that our family is a family forever, and that we will see him again−well and whole and happy. Herbie is good at everything he decides to do. He is an outstanding student in a way that seems effortless. Herbie has a tender heart and loves babies and always asks to hold his little cousins and nephews. He always knows how to comfort the little ones. He loves to draw and expresses himself well in his art. He used to create fun comics and fills sketchbooks with drawings of his favorite characters and medieval items. He is a voracious reader who can devour books in a matter of hours and tell you with perfect recall what he read about. He enjoys playing the guitar, working on cars with his dad, riding his bike, and beating everyone else’s high scores in Just Dance. We will miss his passionate piano playing. Our house seems unusually quiet without the strains of the Zelda or Skyrim Theme songs, Gerudo Valley, Megalovania, and occasional hymns. He is an avid gamer and master Lego builder. He loves stand-up comedy and can imitate entire routines performed by Brian Regan, as well as being quick-witted and funny in his own way. He loves to sing and perform and loves being a part of the choir and theater programs at Provo High. There are so many things that Herbie is passionate about, his dislike for jeans and wasps included. Herbie is such an obedient son. He does whatever he is asked, even when it isn’t what he wants. He can talk for hours about subjects he is interested in. Herbie loves his siblings and especially looks up to his older siblings. Many of his talents and hobbies come from his desire to be like his big brothers and sisters. We, as Herbie’s family, have been so thankful for all of the support we have been shown. The best thing you can do for us is to look for someone who is in need of a friend and then make the effort to get to know them. Just love everyone, always. Kindness and love are always the answer. Herbie is lucky to have his Grandma EJ and Grandpa Herb Royce who were waiting for him when he made it back Home. Those of us who are anxiously awaiting the day that we will be reunited as a family are his parents, Allen and Gerberta; his siblings, Allen & Kia, Elle & Calvin Francis, Julia, Kobe, Eden, Neve, Claire, Owen and Benson; his grandparents, Hardy & Cleone Black, and more aunts and uncles and cousins than you can imagine. Funeral services will be held at 11:00 a.m., Saturday, March 14, 2020 at the Provo Utah Sunset Stake Center, 1560 South 1100 West, Provo, Utah. Visitations will be held at the church on Friday, March 13 from 6-8:00 p.m. and Saturday from 9:30-10:40 a.m. prior to services. Interment, Provo City Cemetery. Condolences may be expressed at www.bergmortuary.com.

Herbert Hardy Black was born October 28, 2004, on a crisp fall morning. He left us on March 8, 2020, on a rainy Sunday afternoon. He left, but he is still with us. It is common practice in obituaries to use the past tense when describing the... View Obituary & Service Information

The family of Herbert "Herbie" Hardy Black created this Life Tributes page to make it easy to share your memories.