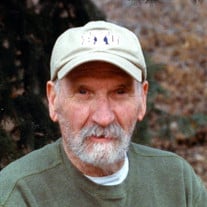 Howard Lee Nelson was born November 25, 1935 in Hilt California. Howard was the son of Kenneth Hamlin Nelson and Alta May Childers. Howard passed away August 24, 2017 in Payson, Utah. He grew up in Fortuna, California with 2 older brothers as his role models. He graduated from Fortuna Union High school. Howard served for 4 years in the United States Navy stationed in Japan. He served as an E2 Seaman Apprentice and took care of the sailors leave, time and pay. Howard attended Ricks College for 2 years. This is where he joined the LDS Church. He moved to Utah where he met and married Betty Eileen Pope in the Salt Lake City LDS Temple. They were blessed with 7 children. They divorced later. He worked at Geneva Steel for many years as a crane operator. He loved golfing, the Utah Jazz, football and his grandchildren. Howard was a loving, hard-working husband, father, grandfather and great grandfather. He was preceded in death by his parents, Brother Delbert Nelson, and his son Richard. He is survived by his brother Arnold Nelson, his children, Robert (Jenny) Nelson; Provo, John (Jamie) Nelson; Springville, Traci (Steven) Smith; Santaquin, Mike (Lisa) Nelson; American Fork, Jay (Diane) Nelson; Payson, Tora (Boyd) Morrison; Murray, 25 grandchildren and 13 greatgrandchildren with 2 on the way. He will surely be missed by all. Family and friends may call Monday August 28, 2017 from 12:30pm to 1:15pm at the Berg Mortuary of Provo. Interment will be at Camp Williams Cemetery, 17111 S. Camp Williams Road, Bluffdale, Utah, at 2pm where he will be honored. Condolences may be expressed at www.bergmortuary.com.

Howard Lee Nelson was born November 25, 1935 in Hilt California. Howard was the son of Kenneth Hamlin Nelson and Alta May Childers. Howard passed away August 24, 2017 in Payson, Utah. He grew up in Fortuna, California with 2 older brothers... View Obituary & Service Information

The family of Howard Lee Nelson created this Life Tributes page to make it easy to share your memories.