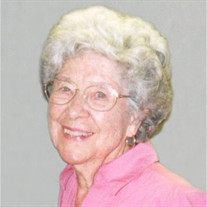 Ila Wright Parkinson Wheatfill, 97, of Provo, Utah passed away peacefully at the home of her daughter, Janice Marshall on September 27, 2014. She was born November 27, 1916 in Blackfoot, Idaho, the second daughter of Clarence Smart and Charlotte Wright Parkinson. As a young girl, Ila moved from Blackfoot to Long Beach, CA, graduating from Long Beach Polytechnic High School. She married Edward Lewis Wheatfill July 9, 1940 in the Saint George Temple. They had 4 children: Edward Lewis (Bonnie) Wheatfill Jr., Garden Grove, CA; Janice (Robert) Marshall, Springville, UT; Richard Evan (Robin) Wheatfill, San Juan Capistrano, CA; David Irving (Cecelia) Wheatfill, Quemado, NM; 16 grandchildren and 39 great-grandchildren. An active member of The Church of Jesus Christ of Latter-Day Saints, she loved music and sang in a trio in ward and stake activities with her sisters Venna Black and Macel Handy. As adults they went on to sing in the Madsen Women’s Chorus. Singing and music was one of the greatest joys of her life. While in California she was chorister of the Long Beach Singing Mothers, performing locally and later in General Conference in Salt Lake City. A devoted Latter-day Saint, she loved the Gospel of Jesus Christ. She served in many callings in the Stake and Ward level, as well as a full time mission to South Africa and Zimbabwe. She found great joy in service to others and received strength and purpose each day from her love of helping others. Her long life was a model of faith, and an inspiration to all who knew her. It is with deepest gratitude that we express our sincere thanks to members of the Edgemont 11th Ward and caregivers for their kindness and acts of service that allowed Ila to stay in her home in her later years. Funeral services will be held at 11:00 a.m., Monday, October 6, 2014 at the Edgemont 11th Ward Chapel, 3050 North Mojave Lane, Provo, Utah. Friends may call at the Berg Mortuary of Provo, 185 East Center Street, Sunday, October 5, from 6-8:00 p.m. and at the church Monday from 10-10:45 a.m. prior to services. Interment, Provo City Cemetery. Condolences may be sent online at www.bergmortuary.com.

Ila Wright Parkinson Wheatfill, 97, of Provo, Utah passed away peacefully at the home of her daughter, Janice Marshall on September 27, 2014. She was born November 27, 1916 in Blackfoot, Idaho, the second daughter of Clarence Smart and Charlotte... View Obituary & Service Information

The family of Ila Wright Parkinson Wheatfill created this Life Tributes page to make it easy to share your memories.

Send flowers to the Wheatfill family.