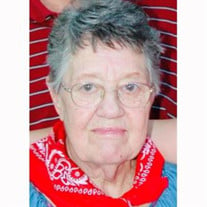 Ina Russell Bulygo was born on 11 Oct. 1927 in Oakley, Summit Co., Utah to Charles Lyman Russell and Vera Gibbons. She was the fifth of eight children born to Charles and Vera. Ina died on 6 Aug. 2020 at the Oakmont Care facility in Katy, Texas... View Obituary & Service Information

The family of Ina Russell Bulygo created this Life Tributes page to make it easy to share your memories.

Send flowers to the Bulygo family.