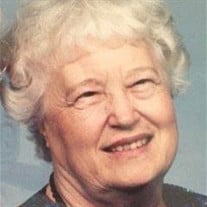 Irena Beth Richardson Webb, 96, returned to her heavenly home on January 9, 2016, in Provo, Utah. Beth was born September 23, 1919, to Edmund A. Richardson and Ivie Romney in Thatcher, Arizona. She was raised in Arizona and moved to Utah her senior year of high school. She was a very accomplished musician. She was an organist in every auxiliary in the LDS Church, including Priesthood. Her first calling as an organist came while she was still in Primary. She loved serving as an organist her entire life. She shared her love of music with her children. Beth majored in English and minored in modern languages at Brigham Young University, then went on to receive a bachelor’s of science in Library Sciences (considered equivalent to a Masters) from the University of Denver. She had a long career at the BYU Library as the Humanities and Arts Librarian, specializing in Music and Arts. Beth married her eternal companion, Francis “Frank” Adelbert Webb, on May 29, 1952, in the LDS Salt Lake Temple. They raised their four children in California and Utah. Beth is survived by her children, Peggy Haynes, Spanish Fork; Sheri (Gary) McMurtrey, Bayfield, CO; Marilyn Webb, Provo; and Kenneth (Lori) Webb, Orem; 26 grandchildren, and 22 great-grandchildren. She was preceded in death by her husband, her six brothers and sisters, and her parents. The family expresses their thanks to the personnel of Hearts for Home Health, Aspen Senior Center, Horizon Home Health and Hospice, Aspen Senior Care, and Legacy Village of Provo for the loving care they provided for our mother during her declining years. Funeral services will be held at 1:00 p.m., Saturday, January 16, 2016 at the Edgemont 6th Ward, 4056 North Timpview Drive, Provo, Utah. Friends may call at the Berg Mortuary of Provo, 185 East Center Street, Friday, January 15 from 6-8:00 p.m. and at the church Saturday from 12-12:45 p.m. prior to services. Interment will be in the Provo City Cemetery. Condolences may be extended to the family at www.bergmortuary.com. In lieu of flowers, donations may be made to the LDS Church general missionary fund or to the HBLL Library at Brigham Young University.

Irena Beth Richardson Webb, 96, returned to her heavenly home on January 9, 2016, in Provo, Utah. Beth was born September 23, 1919, to Edmund A. Richardson and Ivie Romney in Thatcher, Arizona. She was raised in Arizona and moved to Utah her... View Obituary & Service Information

The family of Irena Beth Richardson Webb created this Life Tributes page to make it easy to share your memories.

Send flowers to the Webb family.