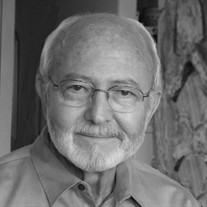 Ivan Anthony Crosland, age 78, was born in Holden, Utah on August 29, 1936, to George and Clara Crosland. He married Helene Bennett on March 31, 1959, in the Manti Temple and they began their lives together. Ivan began his teaching career at Pacific High School in San Leandro, CA followed by four years at Weber State. The rest of his career was spent as a professor of theatre and film at BYU which included time at BYU-Hawaii. He also enjoyed several summers as a guest director at Playmill Theatre in West Yellowstone, MT. On stage, he had many acting triumphs. His portrayal of King Lear was layered with emotional depth and power, a role he performed multiple times. Ivan’s career as an actor, director and teacher was truly inspiring. His work touched so many, from the audiences for whom he performed, to the actors who benefited from his gentle, yet strong, guidance and the hundreds of students who found his classroom a safe place to explore and learn. He was a generous man, opening his home and his heart to many over the years. He loved the beauty within people and reverenced the earth’s beauty in all its forms. He knew how to create a theater set for just the proper effect, how to arrange a vase of flowers that would gladden the eye and how to masterfully and patiently shape a bonsai tree over the course of years. Ivan beautifully landscaped his yard. His backyard, in particular, was a gathering place for family and friends where it often served as an oasis on warm summer evenings. His wife, Helene, by his side in all things, was his greatest support, perfect partner and devoted caregiver. Ivan was a member of the Utah National Guard. He served as a missionary in the Northwestern States Mission for the Church of Jesus Christ of Latter Day Saints. He served on stake high councils and in bishoprics in California, North Ogden, the MTC and at BYU. He also had the opportunity to serve on the Aaronic Priesthood General Board of the Church. He used his theatrical talents to direct the General Church production of Zion, in the Salt Lake Tabernacle, acted in and directed church pageants in Oakland as well as the Hill Cumorah pageant. His voice was used in many church films, recordings and in temple visitor centers. Ivan’s final assignment was as an ordinance worker in the Provo Temple where he served together with Helene for 10 years. He passed away peacefully in his home on March 26, 2015, with children at his side and in the arms of his loving wife of 56 years. He is survived by his wife, Helene, and their five children; Richard (Anne)-Provo, UT, Roger (Ruth)-Pleasant Grove, UT, Leslie (Brian) Merkley-Highland, UT, Michael (Kimber)-Warrenton, VA, Matthew (Andy)-NY, NY, his sister, Ann Whiting-Cedar City, UT, as well as 15 grandchildren and 6 great-grandchildren. He was preceded in death by his parents, brother Ralph, and sister, Virginia (Bill) Palmer. Funeral services will be held at 11:00 a.m., Friday, April 3, 2015 at the Pleasant View 1st Ward chapel, 650 Stadium Avenue, Provo, UT. Friends may call at the church Thursday, April 2nd, from 6-8:00 p.m. and Friday from 9:30-10:45 a.m., prior to services. Internment, Holden Town Cemetery, Holden, UT. Condolences may be sent online at www.bergmortuary.com.

Ivan Anthony Crosland, age 78, was born in Holden, Utah on August 29, 1936, to George and Clara Crosland. He married Helene Bennett on March 31, 1959, in the Manti Temple and they began their lives together. Ivan began his teaching career at... View Obituary & Service Information

The family of Ivan Anthony Crosland created this Life Tributes page to make it easy to share your memories.

Send flowers to the Crosland family.