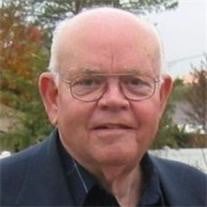 Gene Hansen, age 81, died May 17th, 2013 in American Fork. He was born February 27, 1932 in Salt Lake City, Utah, the son of Ivan J. and Eleanor Cameron Hansen. Raised in Whittier California, Gene developed an early love for learning, athletics and good music, interests to which he devoted himself throughout his life. He loved his family, his church, and his country. During and following the years of the Korean War, he served as a commissioned officer in the United States Navy. He was a member of The Church of Jesus Christ of Latter-day Saints and fulfilled many callings therein including service as a teacher, as Bishop of the East Millcreek 4th Ward in Salt Lake City, and as a High Councilor in both the East Millcreek and Ephraim Stakes. He earned a B.S. degree from Brigham Young University, and an M.B.A. from Stanford University. Following several years of private business experience, Gene began a 30 year career in higher education. He held administrative and faculty positions at the University of Utah and at Washington State University. For the 10 years prior to his retirement, he was Vice President for Administrative Services and Treasurer of Snow College in Ephraim. Gene met his beloved wife, Betty, in Washington D.C. during his service in the U.S. Navy. They were married in the Manti Temple on November 5th, 1954. Together they raised 4 beautiful children and lived together in love for 44 years. Following their retirements they spent several happy years together until Betty's death in 1998. Gene is survived by his children: Deborah Jean (Mark) Plummer, Ephraim; Steven Kent (Anita) Hansen, Sandy; Catherine Ann Shipley, Riverton; and Brenda Kay Hansen, Salt Lake City; by 19 grandchildren, 24 great-grandchildren, and by his sister Nancy Anne Judson, Orem. Funeral services will be held at 12:00 p.m., Thursday, May 23, 2013 at the American Fork 14th Ward Chapel, 1100 East 400 North, American Fork, Utah. Friends may call at the Berg Mortuary of Orem, 500 North State Street, Wednesday from 6-8:00 p.m. and at the church Thursday from 11-11:45 a.m. prior to services. Interment, Orem City Cemetery. Arrangements provided by Berg Mortuary, Provo, UT. Online condolences may be sent through his obituary at http://www.bergmortuary.com/

The family of Ivan (Gene) Hansen created this Life Tributes page to make it easy to share your memories.