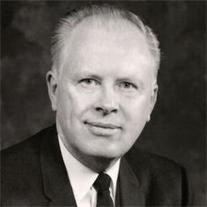 Ivan Robison Willey passed away Tuesday, November 29, 2011 just seven weeks short of his 100th birthday. He had planned to watch others celebrate his centennial; he is undoubtedly dancing with his sweetheart instead. Ivan was born January 14, 1912, in Byron Wyoming, the fourth of seven children of original Big Horn County pioneers, Roy and Clarissa Robison Willey. Graduating from Byron High School, Ivan first gained distinction as an all-state basketball player. He received a B.S. degree from Brigham Young University in 1935. With his wife, Evelyn Bourne Willey, he then returned to Wyoming where he joined the teaching profession and eventually completed his Master's and Doctorate degrees at the University of Wyoming. His original doctoral research resulted in the Wyoming Legislature passing the Wyoming School Foundation Program, which provided equitable funding for Wyoming schools for 50 years. Ivan spent 20 years as principal and superintendent in Wyoming public schools, followed by 22 years at the University of Wyoming, where he was professor, department head and Dean of the College of Education. His professional memberships included the Wyoming Education Association, the National Education Association, the American Association of School Administrators, the Wyoming's delegate to the 1955 National Conference on Education and were President of the Wyoming School Study Council, the Wyoming Education Association, and the Wyoming School Administrators Association. Ivan conducted school workshops, surveys, evaluations and consulting services throughout Wyoming and for many other western states. Before retiring from the University of Wyoming in 1977, he directed and served as advisor for more than 50 candidates who were awarded doctoral degrees. Honors Ivan received included the Wyoming "Gold Key" award for leadership in education and the Brigham Young University Emeritus Club Special Recognition Award. A member of The Church of Jesus Christ of Latter-day Saints, Ivan served as Bishop, as High Councilor, as President of the Cheyenne, Wyoming Stake from 1969 to 1979, and especially as a faithful home teacher. He, accompanied by his wife, Evelyn, was Director of the Idaho Falls Temple Visitors' Center from September 1979 through March 1981. Working on the first building with his own hands, Ivan, with Evelyn's assistance, established and maintained a large apartment business in Laramie, Wyoming. He was also one of the founding directors of a bank in Laramie and was an active member of the Kiwanis club for over 40 years. Even though an automobile accident in 1954 resulted in a seven month hospital stay, lifelong discomfort, and a inability to participate in the ball games he loved, Ivan maintained a vigorously active life, honoring his heritage of hard work. He prided himself on remembering the names of those with whom he associated. Students, church members, tenants, friends, school and business acquaintances, he remembered them all. Many a college student came to his door applying to rent an apartment, only to be surprised when Ivan inquired about his or her grandparents. Ivan loved Wyoming, its schools, its people, its geologic formations, and its fish. His grandchildren fondly remember the fishing excursions as well as Grandpa's stories and his magic tricks. They will also remember visiting him on Provo, where he lived with and was cared for by his younger daughter, Ann Willey, for the last 15 years of his life. A generous, loving father, grandfather and great-grandfather, Ivan is survived by his daughters Ann Willey, of Provo, Utah and Mary Rich (Robert) of Salt Lake City, Utah, five grandchildren and their spouses, 15 great grandchildren, and his older sister, Armenia Stoker of Logan, Utah. He was preceded in death in 1997 by his wife of 62 years. His family sincerely thanks all those who professionally and compassionately cared for, visited, and supported him during his last years. Funeral services will be held at 2:00 p.m., Saturday, December 3, 2011 at the Edgemont 9th Ward Chapel, 4295 North Canyon Road Provo, UT. Friends may call at the church from 12:00-1:45 p.m. prior to services. Interment will be in the Provo City Cemetery. Condolences may be sent from www.bergmortuary.com.

Ivan Robison Willey passed away Tuesday, November 29, 2011 just seven weeks short of his 100th birthday. He had planned to watch others celebrate his centennial; he is undoubtedly dancing with his sweetheart instead. Ivan was born January... View Obituary & Service Information

The family of Ivan Willey created this Life Tributes page to make it easy to share your memories.

Send flowers to the Willey family.