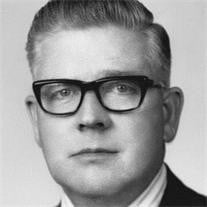 Iven Verl Funk passed away on Tuesday, October 30, 2012, in Provo, Utah. He was 95 years old. Verl was born in Bountiful, Utah, on September 16, 1917, a son of Walter Richard Funk and Minnie Alvira Burton. The following year his family moved to Park Valley, Utah, where he spent most of his youth. In the spring of 1932 the family moved to Cache Valley, Utah, where he graduated from North Cache High School. In 1936 they moved to Southern California, where he met his eternal companion, Mona Holladay. The couple was sealed for eternity in the Mesa Arizona LDS Temple in 1938. Until 1977 they resided in Temple City, California, where they raised their family and where Verl worked as a banker and ba nking executive. He served in the U.S Navy during World War II. Verl served in many callings in The Church of Jesus Christ of Latter-day Saints, including twice as Bishop of Las Flores Ward, Pasadena Stake. After moving to Utah in 1977, he was employed by the LDS Church Real Estate Department until he retired in 1982. He and Mona were then called to labor as full-time proselyting missionaries in the California San Jose Mission from 1983-84, where they were especially successful in their work with young single adults. Verl loved the Church and the Gospel of Jesus Christ, devoting many years of study to prophecies of the Last Days. A devoted husband and father, he was also an avid genealogist and gardener. He deeply missed Mona after her passing in January 2012 and longed to be reunited with her. His family rejoices at their reunion and their eternal marriage. He is survived by the following children: Elma Jeanine Funk Franson (Karl) of Springville, Ronald Burton Funk (Wanda) of Lehi, Mona LaVon Funk Anderson (James) of High River, Alberta, and Alan Verl Funk (Judy) of Orem. A son, David Curtis Funk, died at birth in 1954. He and Mona have 26 grandchildren and 79 great-grandchildren. A funeral service will be held at 11:00 a.m. on Saturday, November 3, at the LDS Chapel at 700 South 200 West, Orem, Utah. Friends may call at the church from 9:30-10:45 a.m. prior to the service. Interment will follow at the Provo City Cemetery. Condolences may be sent to the family through his obituary at bergmortuary.com.

Iven Verl Funk passed away on Tuesday, October 30, 2012, in Provo, Utah. He was 95 years old. Verl was born in Bountiful, Utah, on September 16, 1917, a son of Walter Richard Funk and Minnie Alvira Burton. The following year his family moved... View Obituary & Service Information

The family of Iven Funk created this Life Tributes page to make it easy to share your memories.

Send flowers to the Funk family.