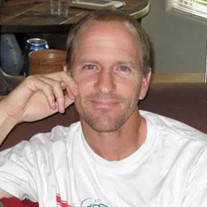 Jeffrey Blaine Talley, loving son, brother, husband, father, and friend to many, passed away peacefully in the arms of his good wife Andria, in the early evening on Friday, July 20, 2018. Blaine was born July 1, 1974 to Jeffrey Hy and Audrey Fowler Talley in Colorado. After the family relocated to Utah, Blaine attended Wasatch Elementary, Dixon Jr High, and graduated from Provo High in 1992. Blaine grew up in the mountains of Utah and quickly took to the rivers and streams in the area. Many summer vacations were spent in Montana at the Ranch, a location that would grow dear to him. Through his early school years he found loves in his life, which included helping others, playing golf, fly fishing, bird hunting, and skateboarding which turned to snowboarding later in life. As Blaine grew older his accomplishments and skills increased in his interests and careers. His primary interest was golf. After his Freshman year in high school he carded a 78 in the Provo Open, along with the large handicap from the previous year, he won the B Flight. His Junior year, he brought a 4th Place trophy home in High School Regionals and a year later brought home First place in Regionals. In college there were more trophies as he led the UVSC Wolverines first two Golf Teams, and helped establish the school as a competitive program. He learned early in golf that the only way he was going to beat his older brother was on the green. We all learned to fear and tremble when he stepped foot on the green with the flat stick in hand. Hundreds of feet of putts per round went down on a regular basis. Everyone was a victim at one time or another. As much as he loved victimizing people on the course, he loved helping people in need. He would drop anything he was doing to help when the call came. Again, many people benefited from his loving kindness and charity. In the summer of 1994, while walking through the parking lot of a dance club in Provo, Blaine met Andria. Things became serious pretty quickly but Andria was set to go on an LDS mission in April. A week before her farewell, it was decided that maybe she should stay home and they should get married instead. They were sealed in the Salt Lake Temple on June 29, 1995. Their first child, Preston Shane, came into their lives in January of 1997 and their second child, Megan, joined the family in July of 1999. Blaine went to work at Liberty Safe prepping for paint on the shop floor and quickly moved up the ladder through the years. When he left the company, he was a National Sales Account Manager. He made a brief stop at Whisper Creek Log Homes, working in sales, before he landed at VOX Marketing where he would develop a fulfilling career and an amazing work family that would rally around him and provide vital support and love through the final months of his life. Blaine lived the motto “work hard, play hard”. He went to work to plan get away vacations. He and his VOX brothers and their wives made many golf trips to notable courses across the country. There was always a trip in the works with wife and kids, wife and friends, dad and brothers, Mom, Dad and Family, or the fishing and golf trips with about anyone. Blaine is survived by his wife Andria Lowry Talley, son Preston Shane Talley, daughter Megan Talley Richardson (Rockwell), parents Jeffrey Hy and Audrey Fowler Talley and siblings John Madison Talley (Niki), Jennifer Talley Atkinson (Richard), Erin Talley, and Richard Franklin Talley (Nicole). Funeral services will be held on Friday, July 27, 2018 at 11:00 a.m. in the Slate Canyon 15th Ward Chapel, 1315 East 900 South, Provo, Utah. Friends may call on the family Thursday, July 26, from 6-8:00 p.m. at the Berg Mortuary of Provo, 185 E. Center Street and at the church Friday, from 9:30-10:45 a.m. prior to services. Interment will be in the Provo City Cemetery. Condolences may be expressed at www.bergmortuary.com. J. Blaine Talley's Funeral services will be held on Friday, July 27, 2018 at 11:00 a.m. in the Slate Canyon 15th Ward Chapel, 1315 East 900 South, Provo, Utah. Friends may call on the family at the Berg Mortuary of Provo, 185 East Center Street, Thursday evening from 6 until 8 and at the church on Friday morning from 9:30 until 10:45. Interment will follow in the Provo City Cemetery. To express condolences to the family and to read the full obituary please go to www.bergmortuary.com.

Jeffrey Blaine Talley, loving son, brother, husband, father, and friend to many, passed away peacefully in the arms of his good wife Andria, in the early evening on Friday, July 20, 2018. Blaine was born July 1, 1974 to Jeffrey Hy and Audrey... View Obituary & Service Information

The family of J. Blaine Talley created this Life Tributes page to make it easy to share your memories.

Send flowers to the Talley family.