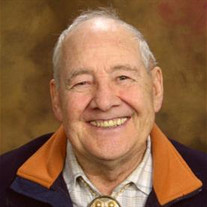 In the late morning hours of Monday, February 3, 2015, J. Max Gardiner, age 91, of Orem, left his strong and mortal body and returned to Heavenly Father’s waiting arms. Max passed away at the home of his daughter in Provo. Max, as he preferred to be called by family and friends was at peace with everyone, and had been wanting to join his lovely “Millie”, Mildred, his parents, his sisters, nieces and nephews, and his first grandchild, Bonni Colleen, who he and his Monie had held in their sweet loving arms when, at 4 days old, she was taken from life support. The sweet reunion that started on the Sunday before he left us, is of the glory befitting the life of a man who literally lived to love his family, save the lives of others and make life better for all he met. Max was born on July 2, in Magna, Utah, to Joseph Nichols Gardiner, and Temperance Millie Evans. A few years later the growing family moved to several acres on what would be the family farm on the southeast corner of 800 East and 800 South. There were He graduated from Orem High School in 1941. He was active in Boxing and Baseball. As the only boy on the Orem farm for all of his first 18 years, he learned to fish, hunt, farm, and take care of the earth that they all depended on. At 15, he became a marksman with the first rifle. He delivered newspapers all over the Orem area, clear to the west bench. Re rode to downtown Provo and proudly paid the $17.00 for his first .30-30. Little did he know how valuable this skill would become a few short years later. He had hitch hiked to California, right after graduation and was working for Lockheed Martin when his mother called and told him his draft notice had come. He hurried home and went to work at Remington Arms, in S.L.C., until he had to report for duty at Ft. Douglas. In was in a carpool on the way, that he met his “Angel”, Mildred Jean Bonnet. They fell in love immediately, and after Max finished Basic Training he came back to Provo. The couple was first married, in Provo, on September 16, 1942. Max shipped off to join the North Africa “Operation Torch”, commanded by General George Patton. He was in the Atlantic when he got the word that his only brother, and the last of his 10 siblings, had been born. His skills as a marksman were apparent and he was given the rank of PFC with the 415 Military Escort Guard Company, and was qualified on three weapons. He also had operators licenses for a Jeep, One ton pickup, and a Harley Davidson Military Police motorcycle. He saw too many battles, as he guarded the German Prisoners, hit the Omaha Beach in the afternoon of D-Day, and battled through France, Belgium, and into Germany. On one trip home with many of Rommel’s elite troops as prisoners, Max and Mildred were sealed to each other in the Salt Lake City Temple, August 17, 1943. When he returned and was discharged December 15, 1945, they started their journey together. The Couple and family built a home on the same land that his family farm was on in Orem, and he loved being by his family so much as all of his sisters, nieces and nephews (and brother) came to visit their parents. He worked at Telluride Motors, the Ford dealership in Provo, until 1953, when he began work United States Steel, Geneva Works. He worked as a foreman in the Pipe Mill, and in the early 1960’s transferred to the Rolling Mills as foreman. A few years later he became the most loved and respected Structural Mill Maintenance Foreman – ever. To this day, his crew members throughout the years will tell family what a great ‘boss’ he was and how he always was right in the middle of whatever repair needed to be done. Max was also a member of the Fraternal Order of the Elks, and Fraternal Order of the Eagles. He is survived by his children, Lora Jean (Jeanie) Campbell; Provo, Shari Colleen Holweg (Timothy), Provo; Julie Dean Gardiner, (estranged); Grandson, Seth Holweg (Sherry), Provo; Jeff Holweg, (Vanessa), Provo; Great Grandsons, Marcus and Maddox Holweg of Provo; three sisters, Juanita Andersen, Orem; Sylvia Gardiner, Orem; Shirley Turpin (Salem). He is preceded in death by his parents; wife, Mildred Jean Bonnett Gardiner; Grandchild Bonnie Colleen Holweg; Sisters, Verda, Myra Beth, Donna Lyle, Barbara June, Annie May, Carol Gay, and brother Darrell Val Gardiner. Funeral services will be held at 2:00 p.m., Tuesday, February 10, 2015 at the Berg Drawing Room Chapel, 185 East Center Street, Provo, Utah. Friends may call at the mortuary Sunday, February 8, from 6-8:00 p.m. and Tuesday, from 1-1:50 p.m. prior to services. Interment, military honors and dedication will be at Provo City Cemetery after the services. Special thanks to the staff of the 7th unit of Payson Veteran’s Home, with special mention for Jesse Keele’s love and care. Also Horizon Hospice and the extraordinary care they provided.

In the late morning hours of Monday, February 3, 2015, J. Max Gardiner, age 91, of Orem, left his strong and mortal body and returned to Heavenly Father&#8217;s waiting arms. Max passed away at the home of his daughter in Provo. Max, as he preferred... View Obituary & Service Information

The family of J. Max Gardiner created this Life Tributes page to make it easy to share your memories.

Send flowers to the Gardiner family.