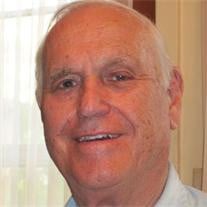 Keith Rigby, Sr. died November 13th, 2012 in Provo, Utah. He was born on October 8, 1926 to Howard Wix and Sarah Celestia Peterson Rigby in Fairview, Utah. He graduated from North Sanpete High School. He married Ruth Krebs June 14, 1945 in the Salt Lake Temple. He attended Brigham Young University, graduating with a Bachelor of Science degree in geology. He received his PhD from Columbia University. He is the author of more than 300 professional papers and several geologic guide books for the state of Utah. He has conducted research on fossil sponges on every continent. He was a beloved professor of geology for many years and also served as the Dean of the Graduate School at BYU. After retirement, he continued his research, publishing a catalog of every known fossil sponge with the University of Kansas and consulting with other geologists from across the globe. He was an accomplished artist and his oil paintings adorned their home. He was an avid gardener and enjoyed sharing his produce with friends and neighbors. Keith is survived by his loving wife, Ruth Krebs Rigby, and his two daughters, Claudia Bosworth (Fred) and Jaynanne Meads, 10 grandchildren and 5 great-grandchildren. His son, J Keith Rigby, Jr. preceded him in death. A funeral service will be held at 11:00 a.m., Friday, November 16, 2012 at the Edgemont North Stake Center, 4560 North Canyon Road, Provo, Utah. Friends may call at the church from 9:30-10:45 a.m. prior to services. Interment will be in East Lawn Memorial Hills, Provo, Utah. All who knew him are welcome to attend. Condolences may be sent from his obituary at www.bergmortuary.com. In lieu of flowers, donations may be made to BYU for the J Keith Rigby Scholarship Fund, c/o Brent Hall, N181 ESC, Provo, Utah 84602.

The family of J Rigby, created this Life Tributes page to make it easy to share your memories.

Send flowers to the Rigby, family.