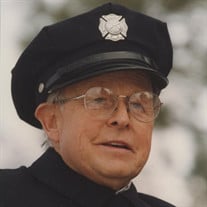 'Grandpa Jack' Hopkinson, 87, of Provo, Utah peacefully returned to his Heavenly Father on Aug 19 after enduring a lifetime of constant pain. At long last, he has now mercifully found total relief. When Jack was six years old, he suffered from osteomyelitis, a very painful bone disease. This devastating ailment affected his left hip, right arm, and lower back. Despite the awful pain he lived with throughout his life, he worked extremely hard, never letting it slow him down. Jack had his first hip replacement when he was 43 and eventually had three more hip replacements. These surgeries helped alleviate much of the pain, but never entirely. During his school years, Jack played the drums in the school band, sang in the A Cappella Choir and enjoyed snow and water skiing. He was a Provo High School graduate Class of 1949. While attending LDS Business College, he was elected Student Body Vice-President. Jack married Joye Rominger and together they raised five children. They often took their young family on camping trips to nearby lakes where they boated and water-skied. Jack's hobbies were 'golfing and goofing', and mostly hunting for unique antiques. While working at Geneva Steel Jack established his own business. He owned and operated Provo Janitorial for over fifty years. Jack was well-known and trusted with keys to buildings all around town. In addition, Jack ventured into real estate investments. He built and managed those properties well into his eighties. Jack was a member of the LDS Church and was lovingly known as 'Grandpa Jack' to those in his ward. His favorite calling was CTR primary teacher. Many of his primary children, who are now all grown-up, gave him big hugs and smiles whenever they saw him. He was also in charge of the breakfast for the annual ward campouts for over forty years. He was a lifetime member of the Sons of Utah Pioneers and once served as President. Jack's most outstanding accomplishments were building their own home while in his twenties, and later constructing his cabin at Sundance. This was quite amazing since he had no formal training in construction. Jack completely restored Provo's first motor driven fire engine so “It could delight the children of all ages for many years to come!” Jack is survived by his wife of 68 years, his children; Mike, Dan, Linda (Don) Houskeeper and Terry, 11 grandchildren and many great-grandchildren. Those who preceded him in death are his son Jeffrey, his parents Bill and Edith Hopkinson, and his two brothers Don and Bill Hopkinson. A memorial service to honor Grandpa Jack will be held on Monday, August 27 at 11:00 am in the Pleasant View III Ward Chapel, 650 East Stadium Avenue, Provo. Viewings will be held Sunday evening from 6:00-8:00 pm at the Berg Mortuary of Provo, 185 East Center, and at the church Monday from 9:30-10:45 am prior to the services. Burial will take place at Eastlawn Memorial Hills, 4800 North 650 East, Provo. Condolences may be expressed at www.bergmortuary.com.

'Grandpa Jack' Hopkinson, 87, of Provo, Utah peacefully returned to his Heavenly Father on Aug 19 after enduring a lifetime of constant pain. At long last, he has now mercifully found total relief. When Jack was six years old, he suffered from... View Obituary & Service Information

The family of Jack Hopkinson created this Life Tributes page to make it easy to share your memories.

Send flowers to the Hopkinson family.