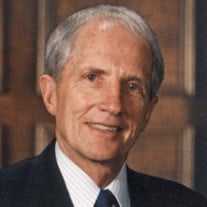 Jack Raynal Pearson (August 27, 1927 – December 9, 2014) has been reunited in heaven with his beloved wife Maridell. Raynal passed away peacefully in his home after a long and wonderful life, having been cared for by his children, wife, and others who loved him dearly. He is preceded in death by his wife, Maridell Lewis Pearson, parents, John and Elizabeth Pearson and his three brothers, Dwain, Marden and Alaiff. Raynal grew up on a farm in Marysvale, UT and served a mission for the LDS Church in the Pacific Northwest. He graduated from Brigham Young University where he met and married Maridell Lewis in 1951. They had a love affair in their marriage that lasted 63 years. Raynal was a chaplain in the U.S. Air Force during the Korean War where his influence for good was felt by many. After his military service, he and Maridell returned to Richfield and began to raise their family of five children. An extremely hard worker with a great mind for business, Raynal was successful in owning and operating Pearson Tire and multiple wholesale and retail tire operations throughout the state. His businesses also included Sevier Valley Oil, gas stations, and hotels in several states. In 1999 he was awarded “Tire Dealer of the Year” by Modern Tire Dealer magazine. He and his wife brought the Sterling Scholar scholarship program to the central Utah communities. He was an active member of Rotary, serving twice as its local club president. In 1979 he moved to Orem, Utah. Raynal faithfully served in many callings for the Mormon Church such as bishop, stake presidency and stake patriarch. He had a valiant testimony of the Gospel of Jesus Christ. He is remembered for his sharp intellect, his great wisdom and his love of practical jokes. He enjoyed animals and working in his garden where he spent many happy hours. He is survived by his children, Todd (Brenda), Rod (Elayne), Trina (Stuart), Larry (Jani) and Marie (Lee), 21 grandchildren and 26 great-grandchildren. Funeral services will be held at 12:00 noon, Monday, December 15, 2014 at the Heatheridge 6th Ward Chapel, 1505 North 130 East, Orem, Utah. Friends may call at the Berg Mortuary of Orem, 500 North State Street, Sunday, December 14, from 6-8:00 p.m. and at the church Monday from 10:30-11:45 a.m. prior to services. Interment, Orem City Cemetery. Condolences may be sent online at www.bergmortuary.com.

Jack Raynal Pearson (August 27, 1927 &#8211; December 9, 2014) has been reunited in heaven with his beloved wife Maridell. Raynal passed away peacefully in his home after a long and wonderful life, having been cared for by his children, wife,... View Obituary & Service Information

The family of Jack Raynal Pearson created this Life Tributes page to make it easy to share your memories.