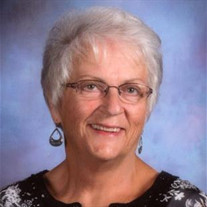 Jacklyn Kay Hinckley (70) returned “home” on October 20, 2014, after enjoying her last “Deer Camp” with her many friends and family. Jackie was born on May 26, 1944, in Beaver, Utah to Jack and Norma Cox. Her family later moved to Orem, Utah, when her father began working at Geneva Steel. After her father’s death, her mother married Leon Smith, whom Jackie considered to be her Daddy. Jackie attended and graduated from Provo High School. She married Ronald D. Thurgood in 1962. They had three sons; Roger, Randy, and Chad. They later divorced. She married John H. Hinckley on February 17, 1976. They had a son, “Little” John, and a daughter, Angela Ruth. They were later sealed in the Provo Temple on June 21, 1977. John and Jackie lived in Provo and raised their family on the Hinckley Farm. Jackie was an active member of the LDS Church. She served in many callings. She loved the people that she served and they loved her. She had a very compassionate heart. Jackie worked several jobs but her last job at Independence High School was her most fulfilling. She loved the kids there and helped many of them graduate. She was stern but the kids knew that they were loved. Jackie retired May 2012 after working in the library at Independence High School for 22 years. Jackie will be remembered and missed for many things; her Sunday dinners; Tuesday night dinner dates with her brother, Steven, and her sister, Gaylene; her dipped chocolates; and her open door policy. She will be remembered most of all for her love for her family. She loved her family; her husband, children, grandchildren, nieces, nephews, brothers and sister. She taught us all about the importance of family and had many get togethers to engrain this value into us. Jackie is survived by her husband, John H. Hinckley; children: Roger (Kathleen) Thurgood, Randy (Lara) Hinckley, Chad (Angela) Hinckley, “Little” John Hinckley, and Annie (John) Robichaux; grandchildren: Tucker Thurgood, Dakoda Hinckley, Remington Hinckley, Tyree Thurgood, Felicia Hinckley, Quinn Hinckley, Brayden Hinckley, Vanessa Hinckley, Ashley Hinckley, Coleton Hinckley, Jackson Hinckley, Kylie Robichaux, Gracie Hinckley, Brooke Hinckley, Heston Hinckley, Braxton Robichaux, Zoey Robichaux, and Zacharie Hinckley; siblings: Donnie (Elaine) Smith, Larry (Cindy) Smith, Gaylene (Randy) Jensen, and Steven Smith. She was preceded in death by her parents, Leon and Norma Smith; her father, Jack Cox; and her brother, Ronnie Smith. The family would like to thank the many people from Hospice Care for the service which they provided Jackie during this illness. Funeral services will be held at 11:00 a.m., Thursday, October 23, 2014 in the Provo Utah West Stake Center, 2530 West 200 South, Provo, Utah. Friends may call at the Berg Mortuary of Provo, 185 East Center Street, Wednesday, October 22, from 6-8:00 p.m. and at the church Thursday from 9:30-10:45 a.m. prior to services. Interment will be in the Orem City Cemetery. Condolences may be sent online at www.bergmortuary.com.

The family of Jacklyn K Smith Hinckley created this Life Tributes page to make it easy to share your memories.

Send flowers to the Hinckley family.