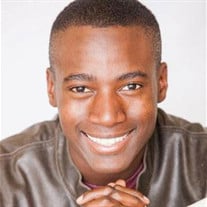 Jackson Jacques Woodward, 22, passed away on December 22, 2016. He was born August 31, 1994 in Carrefour, Haiti. He was welcomed to the family of the late Fremont Leon Woodward and Rosemarie Sonntag Woodward at age 7 with his brother, Ricardo. He was a member of The Church of Jesus Christ of Latter-day Saints and graduated from Maple Mountain High School in 2013. Jackson came to us from difficult circumstances in an orphanage in Haiti, but he showed us how to embrace life to the fullest. He fearlessly pursued his many talents, including acting, modeling, music, sports and business. Jackson was an entrepreneur with many business ventures. As a natural leader in both work and his personal life, Jackson was ambitious and determined to succeed. He was naturally athletic and very competitive. He enjoyed mountain biking with his Dad, and he loved to cook. Jackson never feared trying new things, jumping in headfirst and putting his whole heart into them. Because of his natural talents, anything he tried he did very well and motivated others to want to try new things themselves. Those who knew Jackson could not help but admire his people skills, which he showed in all his endeavors and relationships. Even before his adoption from Haiti, Jackson always had a little entourage of friends. He often took other children in the orphanage under his wing and was generous in sharing his friendship. This genuine love for people and his ability to make friends easily was something he continued his whole life. Jackson is remembered for his big heart and big smile. He was always light-hearted and joked around with everyone. Jackson was so friendly, and he gave great hugs! No matter what, he could always put a smile on anyone's face because he was so friendly and loving. Jackson is survived by his mother, Rosemarie Sonntag Woodward, siblings: Chesney (Kevin) Barahona, Maika (Aaron) Virgin, Ricardo Woodward, Jeffrey Woodward, and Obnette Woodward; niece, Penelope Virgin; grandparents: Steven and Patricia Sonntag, and Leon and DeAnn Woodward. He is also survived by his Haitian parents, Oneze Jean Philippe and Opson Jacques, and family. He is preceded in death by his father, Fremont Leon Woodward. Funeral services will be held at 11:00 a.m., Wednesday, December 28, 2016 at the Dry Creek 2nd Ward Chapel, 355 East Center Street, Springville, Utah. Friends may call at the church from 9:30-10:45 a.m. prior to services. Interment, Spanish Fork City Cemetery. Condolences may be expressed at www.bergmortuary.com or on the Facebook page In Loving Memory of Jackson Woodward.

Jackson Jacques Woodward, 22, passed away on December 22, 2016. He was born August 31, 1994 in Carrefour, Haiti. He was welcomed to the family of the late Fremont Leon Woodward and Rosemarie Sonntag Woodward at age 7 with his brother, Ricardo.... View Obituary & Service Information

The family of Jackson Jacques Woodward created this Life Tributes page to make it easy to share your memories.