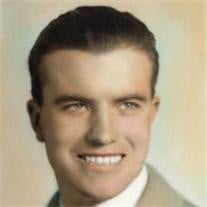 James Vern Campbell, beloved husband of Mary Victoria Campbell for over 62 years, passed away at his home in Payson, Utah on March 18th, 2011. Vern was born on December 13th, 1921 in Riverdale, Utah to Raleigh Helaman and Effie Ballantyne Campbell. Raised in Juniper, Idaho, Vern was one of fourteen children. At age 21 he enlisted in the US Army as an infantryman, and was deployed to the Rhineland and Central Europe Campaigns. He participated in the Battle of the Bulge. His decorations included: American Theater of Operations Ribbon, European African Middle Eastern Service Ribbon, Good Conduct Medal, AR 600-68 Victory Medal. He was proud to serve his country in WWII. Meeting Mary, his sweetheart, was the highlight of his life. Vern and his brother were traveling from Utah to Alaska to find work and stopped to go to church in Seattle. Mary’s mother invited them to dinner and romance bloomed. After a year of courtship they were married on August 19th, 1948 in the Salt Lake City Temple. Vern’s two brothers, Leslie, and John Dean married Mary’s two sisters, Ruth, and Anny. Vern and Mary raised their family of nine children mostly in the Seattle area. Later in life, they moved to Payson, Utah. Vern was an enthusiastic entrepreneur with many business successes. His skills with finish carpentry lead him into the home building business, where he enjoyed creating homes for many families. Early rising and hard work characterized his life, and he instilled the work ethic in his children. His children were blessed to grow up with the example of a loving marriage. An avid writer, he completed many personal journals. A devoted member of The Church of Jesus Christ of Latter-day Saints, he served in many callings. For twenty years he served with his wife as a Seattle temple worker. He had a strong testimony in the Savior as his personal Redeemer. Preceded in death by parents, 5 brothers, 3 sisters and a grandson Christian Titera. He is survived by his wife Mary Victoria, and nine children: Vivian (Murray) Hampson, Rose Ann (Lester) Smith, Harry (Qing) Campbell, Irene (Calvin) Titera, Fred (Elizabeth) Campbell, Gloria (Doug) Suddarth, Linda (Jason) Gallardo, Leila (Mark) Sanelli, and Julie Campbell. He has 37 grandchildren, and 24 great-grandchildren. He is also survived by 3 sisters and 1 brother, Doris Titensore, Dorothy Ormond, Eve Chavalis, David Campbell. Funeral services will be held in the Spring Lake 5th Ward Chapel on Friday, March 25th, located at: 1750 South 586th West, Payson, Utah 84651. Viewing will be from 9:00-9:45 am, followed by the service at 10:00 am. The burial will be at 12:00 noon at the State Veterans Memorial Cemetery, 17111 South Camp Williams Road Bluffdale, Utah 84065. Condolences may be sent to the family at: [email protected]" title="Click to open in a new window or tab" target="_blank" rel="nofollow noopener">[email protected] Please refer to the website for directions to the locations.

James Vern Campbell, beloved husband of Mary Victoria Campbell for over 62 years, passed away at his home in Payson, Utah on March 18th, 2011. Vern was born on December 13th, 1921 in Riverdale, Utah to Raleigh Helaman and Effie Ballantyne Campbell.... View Obituary & Service Information

The family of James Campbell created this Life Tributes page to make it easy to share your memories.

Send flowers to the Campbell family.