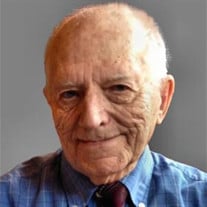 James Rex Goates passed away at his home on Friday, November 28. He was 94 years old. Born August 14, 1920, the second of three children of Stan and Leone (Lunt) Goates, he exemplified the ancient Chinese curse, “May you live in interesting times,” witnessing throughout his life the discovery of penicillin, the introduction of the Model T Ford, the Great Depression, World War II—where he served two years of active combat duty in the infantry and was awarded a bronze star—the atom bomb, the Cold War, the civil rights movement, the moon landing, and so much more. His early years were spent in extreme poverty, mostly in dusty western mining towns, but he was driven by an intense curiosity to pursue education. Inspired by the chemistry lab at U&I Sugar where his father once worked, he eventually earned a PhD in chemistry from the University of Wisconsin in 1947. His professional life was dedicated to teaching and conducting basic science research at Brigham Young University. He chose BYU over several more lucrative and prestigious offers because he wanted to build something larger than his own career. Lucre and prestige were never high on his list of priorities. He retired from BYU after 38 years in 1985. Rex loved to tell about establishing his first research laboratory at BYU in the restroom of an old building on “lower campus.” From these humble beginnings, he produced more than 70 research publications, two books, and several book chapters, and gave innumerable professional presentations. He obtained one of the first National Science Foundation grants ever brought to BYU, in 1953, and had continuous funding from then on. He served as chair of the Department of Chemistry and as dean of Physical and Mathematical Sciences. Most important to him, he earned a reputation as a legendary teacher and mentor. Among many awards he received were Professor of the Year and Distinguished Faculty Lecturer. His children and grandchildren, along with thousands of his science students, were blessed to have benefited from his tutorship in the sciences, not to mention tutorship from the love of his life, Marcia Anderson Goates, in English and the Humanities. Thank you, Mom and Dad, for opening our eyes. It was always so clear when you explained it to us—even diagramming sentences and Carnot engines. Rex met his wife, Marcia, while they both were on the faculty at BYU. They were married in 1948. Soul mates in the truest sense, they loved each other unconditionally, complemented each other’s talents, and lifted each other spiritually. They both exemplified the life of true Christians. They also gave unselfish service to the LDS Church in numerous callings. Most of their life together was in a house on Maple Lane that they designed and had built in 1954. They loved traveling to Europe, New York City, the American Southwest, and anywhere with good opera or ballet. Their children fondly remember backpacking trips in the Uinta Mountains. Marcia passed away in February of 2002, and shortly thereafter Rex experienced a major heart attack, nearly dying of a literal broken heart. He never stopped missing Marcia for his remaining twelve years. Eventually, that stubborn heart gave out. He is survived by three children: Steven (m. Juliana Boerio-Goates), Liane, and Jeffrey (m. Brenda Biesele Goates). A fourth child, Allison, died shortly after birth in 1954. He is also survived by four grandchildren: Sarah Goates Christopherson (m. Jesse Christopherson), Nicholas Goates (m. Sarah Attid Goates), Alyson Goates, and James David Goates, and by two great grandchildren: Julian Christopherson and Damian Rex Christopherson, who carries his great-grandfather’s name. Special thanks to “adopted” daughters Robyn Hall and Ranae Ogden. And thank you to all of the people who worked so hard with us over the years to keep Rex in his beloved home to the end where he was happiest and most comfortable. He was preceded in death by Marcia Anderson Goates, by his parents, Stanley and Leone Goates, his sister Ione Ryan and his brother, Dean Goates. Funeral services will be held at 11:00 a.m., Friday, December 5, 2014 in the Oak Hills 7th Ward Chapel, 1038 North 1200 East, Provo, Utah. Friends may pay their respects at the Berg Mortuary of Provo, 185 East Center Street, Thursday from 6-8:00 p.m. and at the church Friday from 9:30-10:45 a.m. Interment, Provo City Cemetery. Condolences may be sent online at www.bergmortuary.com. In lieu of flowers, donations may be made to an assistantship Rex endowed in honor of his parents to aid graduate students. Make checks out to the Department of Chemistry and Biochemistry and indicate on a note or in the memo line that it is for the "Stanley and Leona Goates Graduate Assistantship". Checks can be mailed to the Dept. of Chem & Biochem, Brigham Young University, Provo, UT 84602.

James Rex Goates passed away at his home on Friday, November 28. He was 94 years old. Born August 14, 1920, the second of three children of Stan and Leone (Lunt) Goates, he exemplified the ancient Chinese curse, &#8220;May you live in interesting... View Obituary & Service Information

The family of James Rex Goates created this Life Tributes page to make it easy to share your memories.

James Rex Goates passed away at his home on Friday, November...

Send flowers to the Goates family.