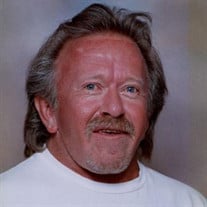 James Boyd Ivie passed away February 13, 2018 in Provo, Utah. He was born July 6, 1963, in American Fork, Utah, the son of Boyd Vee Ivie and Connie Taylor Ivie Leftwich. James grew up in Provo and attended Provo High. He had many handicaps but tried never to let them get him down. His life’s motto was, “Just Try”. He couldn’t crawl as a baby because of all the casts he wore, so he soon learned to get around by scooting on his bottom, using his legs. He shredded a lot of diapers! He wanted to play the guitar. It should have been impossible with his short arms and no thumbs, but not for James. With the guitar on his lap and turned into an impossible position, he was able to play. He wrote the lyrics and music to several songs. He wanted to play basketball but the coach told him no. So he and his friend, Cliff Rowley practiced until he was good enough to play. Then he told the coach he no longer wanted to play; he just wanted to prove him wrong! He was a fabulous artist but didn’t do enough with his talent. He loved bicycling; first out of necessity then for fun, especially with his son Wesley. He LOVED to cook! He was well known for his cookies. He went to school in Price to learn and receive the certificate to drive heavy equipment. He operated a dump truck but most people remember him for his flagging days. James had many demons that took over his life for many years. It was sad for him and his family. He cared deeply for people with challenges and loved laughing at a good joke. He loved his church and especially the Book of Mormon. He read it several times as well as many other books about the gospel. James will be missed. He has gone from us too soon. He is survived by his mother, Connie; sons: Michael James Ivie (mother, Linda Fisher Ivie); Devon Lee Ivie (mother, Donelle Orton); and Wesley James Ivie (mother, Vickie Charlesworth Ivie); 6 grandchildren: Ava, Alanna, Adaline, James Darren Wesley, Silas, and Vanna Dee; and siblings: Lisa Ivie (Mike) Wolsey, Jason Vee (Sheila Beardall) Ivie, and Lewis Dan (Tara Johanson) Ivie. James was preceded in death by his father, Boyd; step-father, Dean Leftwich; and grandparents, Daniel (Lola) Taylor and Vee (Mildred) Ivie whom he loved deeply. Memorial services will be held at 10:30 a.m., Saturday, February 24, 2018 at the Freedom 4th Ward Chapel, 835 South 500 West, Provo, Utah. Condolences may be expressed at www.bergmortuary.com.

James Boyd Ivie passed away February 13, 2018 in Provo, Utah. He was born July 6, 1963, in American Fork, Utah, the son of Boyd Vee Ivie and Connie Taylor Ivie Leftwich. James grew up in Provo and attended Provo High. He had many handicaps... View Obituary & Service Information

The family of James Boyd Ivie created this Life Tributes page to make it easy to share your memories.

Send flowers to the Ivie family.