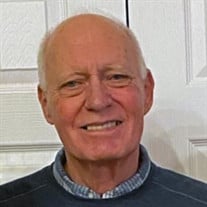 James Merrill Taylor, age 76, of Spanish Fork, Utah passed away on Sunday, May 22, 2022. James was born on August 30, 1945 in San Francisco, California to Pleasant Green and Evelyn Merrill Taylor and was the youngest of three children. James graduated high school in San Carlos, California in 1963 and attended BYU where he met the love of his life, Judy Carol Shoell. They were married on February 5, 1965 and later solemnized their marriage in the Salt Lake LDS Temple. James worked as an Agent for the Utah Railway, retiring after 40 years. A dedicated family man, often working multiple jobs to support his family, he also had a great love of the outdoors and spent countless hours with his family camping, hunting, and fishing, often traveling to Texas, Canada, and Alaska. There was no place he’d rather be than spending time outdoors with his family. James is survived by his wife Judy and their 8 children, Jay Taylor, Tammy Birch, Troy Taylor (Jennifer), Shane Taylor (Donya), Jim Taylor (Kathy), Keri Tiller (Tim), Lori Root (Jason), and Cassie Johnson (Ryan), as well as 35 grandchildren and 67 great-grandchildren. James was preceded in death by his father, Pleasant Green Taylor, his mother, Evelyn Merrill Taylor, and his sister, Carol Williams. Funeral services will be held at 10:30 a.m. on Thursday, May 26, 2022 at the Aspen Meadows 1st Ward Chapel located at 1661 South 1400 East, Spanish Fork, Utah. A viewing for James will be held from 9-10:15 a.m. with the funeral service immediately following. Interment will be held at the Orem City Cemetery. Condolences may be expressed to the family at www.bergmortuary.com.

James Merrill Taylor, age 76, of Spanish Fork, Utah passed away on Sunday, May 22, 2022. James was born on August 30, 1945 in San Francisco, California to Pleasant Green and Evelyn Merrill Taylor and was the youngest of three children. James... View Obituary & Service Information

The family of James Merrill Taylor created this Life Tributes page to make it easy to share your memories.