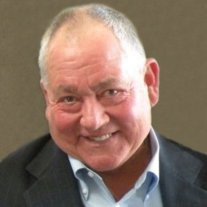 James Ellis Tregeagle passed away Thursday evening, November 21, 2013. He was surrounded by his loving and devoted daughters, Jennifer and Kiersten, and his cherished extended family. Jim brought a smile to the face of everyone he met, and he never let you leave without a joke and a good laugh. Jim was born in Provo, Utah on January 19, 1956 to Beverly Geneal Peay and Lynn Richard Tregeagle. From the moment of his arrival, Jim was filled with spunk, energy, and great zest for life. He was the apple of his mother’s eye and his dad’s pride and joy. To know Jim was to love him. Jim attended Sharon and Cascade Elementary schools, Lincoln Jr. High and Orem High School, where he graduated from in 1974. Jim was the “Big Man on Campus”. He was the full back on OHS football team and the envy of every guy in the school. Jim shared his great love of sports with his father, Lynn, who faithfully attended and cheered him on at every game whether it was football, or his many wrestling meets. Jim was a loyal and dependable friend, and the protector and champion of anyone in need. Jim believes in “man’s best friend is his dog”, and you never saw him without a faithful companion at his heels. Jim attended Utah Technical College in Construction and Business Management. His education served him well as he went to work at Geneva Steel, and later to own and operate his own concrete business, JET Concrete. He was the foreman for Skip Dunn Excavating and recently retired from Provo City. Jim married Valarie Palfryman in 1987 and together they shared two beautiful daughters, Jennifer Geneal, and Kiersten Marie. Jim was a devoted and loving father and grandfather to Brindly, Blaze and Skylie. He loved the countless hours he spent with them playing and teasing them. Jim always made every minute fun and left everyone with a smile. He enjoyed spending time with R.B. and his “buddies” while they watched Football and the NASCAR races. Jim’s energy and enthusiasm for life, his mischievous and humorous nature and his kind and generous personality will be sorely missed by everyone he knew. Jim is survived by his two daughters, Jennifer Bunker (Chase), Kiersten Young (Bridger), Lynn R Tregeagle (father), Ethel B Tregeagle (grandmother), 3 grandchildren: Brindly and Blaze Bunker, and Skylie Young and brother, Douglas K Tregeagle (Collette). He was preceded in death by his mother, Beverly P Tregeagle and his brother, Bradley R. Tregeagle. Family suggests contributions to your favorite charity in lieu of flowers. Graveside services will be held at 11:00 a.m., Tuesday, November 26, 2013 in the Orem City Cemetery, 1500 North 800 East, Orem, Utah. Friends may call at Berg Mortuary of Provo, 185 East Center Street, Monday evening, November 25, 2013 from 6 to 8 p.m.. Condolences can be sent through his obituary at www.bergmortuary.com.

James Ellis Tregeagle passed away Thursday evening, November 21, 2013. He was surrounded by his loving and devoted daughters, Jennifer and Kiersten, and his cherished extended family. Jim brought a smile to the face of everyone he met, and he... View Obituary & Service Information

The family of James Ellis Tregeagle created this Life Tributes page to make it easy to share your memories.

Send flowers to the Tregeagle family.