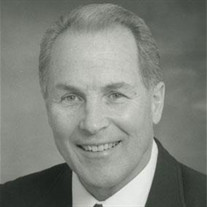 James Robert Young was born on February 19, 1937 in Los Angeles, California, to Clarence Watkins Young and Marjorie Elaine Christensen. He passed away from Waldenstrom's Macroglobulinemia (a rare form of lymphoma) on December 4th, 2016 at home in Lehi, Utah. His devoted wife of 54 years was holding his hand and he was surrounded by his loving family. He had been battling cancer for 22 years. He is our beloved son, brother, husband, father and grandfather. He enjoyed a rich, full life. He attended North Hollywood High School where he excelled in gymnastics. He joined the Air Force and served as a radar operator on an island off the coast of California during the Korean conflict. After four years of military service, he began his studies at BYU where he was the captain of the first gymnastics team. While visiting his family in San Mateo, California for Christmas break, he met his sweetheart JoAnne Stoker and it was love at first sight. She was all his heart desired, yet he felt a prompting to serve the Lord on a mission. He served in the Northern Mexican Mission for 2 1/2 years. Upon his return, his dreams came true and one month later he married the great love of his life. They were sealed for eternity on March 3, 1962 in the Los Angeles Temple of The Church of Jesus Christ of Latter-day Saints. He still calls her his sweet bride. Jim and JoAnne moved 17 times in their preparation years as he pursued his bachelor's, master's and PhD degrees. In their first seven years of marriage, they were blessed with five beautiful children. Jim enjoyed being a professor of elementary education and religion at Brigham Young University. He later earned a license in marriage and family therapy. Through his unique gift of connecting with others, he has blessed thousands of lives. Jim was called to preside as President of the Arequipa Peru Mission from 1986 to 1989. These three years were a highlight in Jim and JoAnne's lives and they continue to have a close relationship with many whom they met and served. Jim was diagnosed with cancer in December of 1994. This did not slow down his enthusiasm for his work, his family, and his friends. He had a charitable heart and endured his many treatments with faith, hope and great courage. He was everyone's hero. Jim willingly served and magnified all of his callings in his church. He loved the great outdoors, fishing, running, working in the yard, and spring and fall housecleaning with JoAnne. He could fix or repair just about anything. Jim was preceded in death by his parents, his brothers Michael and Joseph Young, his step father Lee Reay and his sweet grandson Brigham Reneer. He is survived by his beautiful, devoted wife JoAnne Stoker Young, sister Sondra Young Cravens, step-sister Carol Bench, step-brother Neil Reay, and half-sister Marilee Reay Goetz. Jim is also survived by his five children Christoper W. Young (Karen), Robert J. Young (Debbie), Jennifer Y. Skillings (Chris), Julie Y. Reneer (Randy) and David A. Young (Sarah). He loves and adores his 24 grandchildren and three great grandchildren. He believes with all of his heart and soul that Jesus Christ is indeed the Son of God and love's pure light. JoAnne's heart is broken but is joyful in her knowledge that he is now well and strong again–Jim & JoAnne forever. James Robert Young is truly home for Christmas this year. Funeral services will be held at 12:00 noon, Saturday, December 10, 2016 at the Lehi 23rd Ward Chapel, 650 East 3200 North, Lehi, Utah. Friends may call at the Berg Mortuary of Provo, 185 East Center Street, Friday, December 9 from 6-8:00 p.m. and at the church Saturday from 10:30-11:45 a.m. prior to services. Interment, Spanish Fork Cemetery. Condolences will be expressed at www.bergmortuary.com.

James Robert Young was born on February 19, 1937 in Los Angeles, California, to Clarence Watkins Young and Marjorie Elaine Christensen. He passed away from Waldenstrom's Macroglobulinemia (a rare form of lymphoma) on December 4th, 2016 at home... View Obituary & Service Information

The family of James Robert Young created this Life Tributes page to make it easy to share your memories.

Send flowers to the Young family.