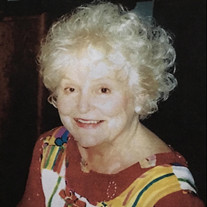 Alice Jane Barton Jensen, 90, passed peacefully away Wednesday, March 7, 2018 in Provo, Utah. She was born January 20, 1928 in Beaver, Utah, the third of six children born to Ken and Thelma Barton. After graduating from Beaver High School, she studied singing at Utah State University, where she met her husband, Delos Clark Jensen. They married July 3, 1946 in Las Vegas, Nevada and were later sealed in the Salt Lake Temple. Jane and Del had many adventures in their long lives together. Del’s service as a meteorologist in the Air Force took them to various postings around the country, as well as a stint in the Azores. They eventually returned to Utah and settled in Salt Lake City. A lifelong member of The Church of Jesus Christ of Latter-day Saints, Jane served faithfully in various callings including primary and relief society teacher, ward missionary, counselor in the relief society presidency, and ward chorister. Her musical training and beautiful soprano voice led her to a calling to sing with the Mormon Tabernacle Choir for 10 years from 1978 to 1988, during which time the Choir toured Japan and Korea, Brazil, Western Europe and the South Pacific. In addition to her love of music, Jane loved the many things that make the world beautiful including art, dance, literature, and nature. For many years a season ticket holder at The Utah Symphony, Ballet West, and Pioneer Memorial Theater, her home was filled with beautiful works of art which she had collected throughout her life and her travels around the world. An avid reader, she loved the classics, but also followed current events and politics with keen interest. She continued to read the newspaper and keep up with world events until shortly before she died. A devoted and caring mother, she instilled in her children and grandchildren a love and appreciation for the same things. She is survived by her husband of 71 years, Delos Clark Jensen; sons, William Barton Jensen (Connie Sargent), Delos Clark Jensen Jr. (Lana Fife), daughter, Jennifer Jensen Olsen (Stanford); ten grandchildren; five great-grandchildren; and siblings, Faye Barton Henrie, Kaye Barton Bailey, and Allen Brent Barton. She was preceded in death by a grandchild, Alex Olsen; and brothers, John Barton and Byron Barton. Funeral services will be held at 11:00 a.m., Saturday, March 17, 2018 at the Berg Drawing Room Chapel, 185 East Center Street, Provo, Utah. Family and friends may visit from 10-10:50 a.m. prior to services. Interment will be in the Salt Lake City Cemetery. Condolences may be expressed to the family at www.bergmortuary.com.

The family of Jane Barton Jensen created this Life Tributes page to make it easy to share your memories.