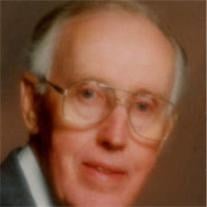 Our beloved husband, father, grandfather, and great-grandfather has been called home to his Father in Heaven. We will cherish our memories of special times spent with him. Jay passed away on June 26, 2011. He was born November 19, 1922 in Provo, Utah to Joseph Oscar and Stella Paxman Garrett. He lived in Provo all his life. He married Betty Lucile Brown May 29, 1943 in Provo, Utah. They were later sealed in the Salt Lake Temple on October 26, 1949. He received his education in Provo schools and BYU. He retired in 1984, after 38 years with Pacific States Cast Iron Pipe Company as staff engineer. He has always been an active member of the LDS church serving in many callings in his ward, stakes, and BYU. He also served two missions with his wife putting together a preventative maintenance program for the church and as service missionaries at the MTC in Provo for sixteen years. He also served as an ordinance worker at the Provo LDS Temple. He loved his wife, sons, daughter-in-laws, grandchildren, and great-grandchildren, and extended family members. They were a special part of his life. He is survived by his wife Betty, three sons, Alan (Sharon) Garrett of Highland, Paul (Cheri) Garrett, and Michael (Christine) Garrett both of Orem, sixteen grandchildren and thirty-one great-grandchildren, two brothers, Weston (Verna) Garrett of Provo and DeLane (Beth) Garrett of Kent, Washington. He was preceded in death by his parents, sisters Mignon Pratt and Norma (Newal) Robison and one grandson, Lee Alan Garrett. Funeral services will be held at 11:00 a.m., Tuesday, July 5, 2011 at the Edgemont 4th Ward Chapel, 4000 North 650 East, Provo. Friends may call at the Berg Mortuary of Provo, 185 East Center, Sunday from 4:00 until 6:00 p.m. and at the church Tuesday from 10-10:45 a.m. prior to services. Interment, Provo City Cemetery. Condolences may be sent through www.bergmortuary.com or [email protected]

Our beloved husband, father, grandfather, and great-grandfather has been called home to his Father in Heaven. We will cherish our memories of special times spent with him. Jay passed away on June 26, 2011. He was born November 19, 1922 in... View Obituary & Service Information

The family of Jay Garrett created this Life Tributes page to make it easy to share your memories.