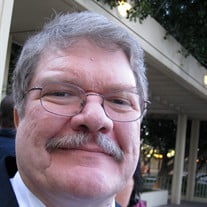 Jay McDougall Johnson loved life and brought love into the lives of many. Born on October 2, 1957, he was the youngest of seven children born to Clara and Clement Johnson. He liked to joke that his mother was eighty years old when she bore... View Obituary & Service Information

The family of Jay McDougall Johnson created this Life Tributes page to make it easy to share your memories.