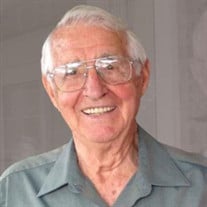 On 28 November 2020, Jay Sylvanus Simons, 100 years of age, passed away of pneumonia at Utah Valley Hospital. He had been ill for one week, and had been strong and healthy all of his life. Jay was born to Flueitt and Inez Waddell Simons on 19 April 1920 in a two room log cabin in Chesterfield, Idaho. After retirement, he helped to restore that cabin. He was the fourth of nine children. He was preceded in death by his parents, and siblings: Wallace Simons, Jessie Simons Bosworth, Floyd Simons, Francis Simons, Edwin Simons, and Jerald Romriell. He is survived by his sister, Fluetta Simons Petersen, and his brother, Glen Romriell. Jay served 39 months during WWII as a medical corpsman, returning to the Chesterfield wheat farm in March of 1946. There he met the lovely Shirley Smith. They married on 6 November 1946 in the Salt Lake Temple, and had been married almost 65 years when Shirley passed in August 2011. Jay was a steady, stalwart, reliable, and faithful member of the Church of Jesus Christ of Latter-Day Saints. After one year of marriage, Jay was called by Elder LeGrand Richards to serve a full-time mission. He was called to the Canadian Mission in Toronto. Shirley was called to join him for the last seven months of his mission, and they served together in Timmons, Ontario. Following their mission, they moved to Fair Oaks, California. Jay worked in the manufacture of highway, bridge, and building construction in Central and Northern California, and he became a professional engineer and quality control manager. Jay and Shirley are the parents of four children: Lynda (Bruce) Ogden, Alan (Yoli) Simons, Michael (Toshiko) Simons, and Cheryl (Steve) Allred. They have 18 grandchildren and 21 great-grandchildren. Jay and Shirley lived in Oakland, California for almost 27 years, raising their children and giving many years of service to the Lord. Jay twice served as a bishop, as a high councilor, and several times as a Stake Missionary. After retiring and moving to Provo, Utah, Jay and Shirley returned to Chesterfield, Idaho for six months each year to help direct the restoration of the pioneer village. They served as directors for six years, and then returned to help for many years. They served as Stake Missionaries and welcomed thousands of visitors who visited Historic Chesterfield. The difficult physical work they did cannot be exaggerated, but they both loved Chesterfield and loved being there. Jay served as an Ordinance Worker in the Provo Temple until the Temple closed in early 2020. He worked in FamilySearch Indexing until the last week of his life. His goal was to index 100,000 names by his 100th birthday. At the time of his death, he had indexed 136,682 names. Jay believed in being where you are supposed to be, when you are supposed to be there, and doing what you are supposed to be doing. He took to heart the philosophy of a pamphlet he read, “Work: My Blessing, Not My Doom”, and he lived his life with that attitude. Jay was a beloved, revered patriarch to his family. His influence and example will continue to bless their lives. His life was an example of service to God, love of his fellow men, and enduring to the end. He was loved by many, and will be missed by all who knew him. Funeral services will be held at 1:00 p.m., Saturday, December 5, 2020 at the Chesterfield Ward Chapel, 1001 Stalker Road, Chesterfield, Idaho. Interment will follow at the Chesterfield Cemetery, less than half a mile from the log cabin where Jay was born. Condolences may be expressed at www.bergmortuary.com.

On 28 November 2020, Jay Sylvanus Simons, 100 years of age, passed away of pneumonia at Utah Valley Hospital. He had been ill for one week, and had been strong and healthy all of his life. Jay was born to Flueitt and Inez Waddell Simons on... View Obituary & Service Information

The family of Jay Sylvanus Simons created this Life Tributes page to make it easy to share your memories.

Send flowers to the Simons family.