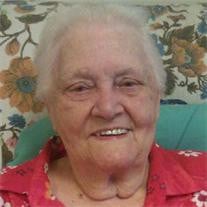 LuJean (Stephens) Christensen passed away Saturday evening, January 19, 2013 in the Utah Valley Hospital, following a short illness. Her family surrounded her bed as she returned to her Heavenly Father and to her awaiting husband. Jean was born March 25, 1925 to Arthur Myrthn (Steve) and Hortense Lowe Stephens in Twin Falls, Idaho. She married Jay Albert Christensen on August 11, 1943 in Provo, Utah. They were later sealed in the Logan Temple in August of 1951. Shortly after their marriage, Jean said good-bye to her husband for two and a half years as he served in the European Theater during World War II. Their first daughter, Jayanne, was born while he was overseas in the USAAF. Jean and Jay have four children: Jayanne Jarvis, Susan Young, Randy Christensen, and Cindy McGrath. They would eventually have 16 grandchildren, 28 great-grandchildren, and 2 great-great-grandchildren. She is survived by all her children and grandchildren as well as her sister, Martha Wright. The Christensens built a home in southeastern Provo and there raised a family. Cancer took her loving husband's life in August of 1982. Jean remained in her Provo home until health issues recently required her to move into an assisted living facility in Santaquin. Throughout her life, she loved to read, travel, and crochet. The family invites you to attend the funeral service Friday, January 25, at 11:00 a.m. in the Bonneville 2nd Ward building, 1289 East 300 South, Provo. There will be a viewing at the church from 9:30-10:45 a.m. prior to the funeral service. Burial will be in the Provo City Cemetery. Condolences may be sent through her obituary at www.bergmortuary.com.

LuJean (Stephens) Christensen passed away Saturday evening, January 19, 2013 in the Utah Valley Hospital, following a short illness. Her family surrounded her bed as she returned to her Heavenly Father and to her awaiting husband. Jean was... View Obituary & Service Information

The family of Jean Christensen created this Life Tributes page to make it easy to share your memories.