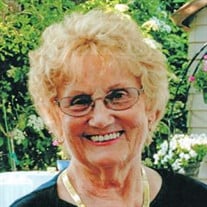 Jean Dixon Ekins, 86, wife of Phyl G. Ekins, died in her Provo home Tuesday, December 31, after battling cancer for more than five years. Jean was known for her support of fine arts and was one of the most revered special education teachers in Alpine School District where she received Alpine School District’s Teacher of the Year in 1992-1993 and runner up for the State of Utah. As a teacher, she worked with special needs children and created the group “Joy” that performed dance performances all over the state of Utah. She also worked tirelessly ensuring her students learned at high academic levels because she believed in them. An identical twin with June Dixon Oaks, Jean was born in Provo, Utah, March 24, 1933, to Charles Hyrum and True Call Dixon. Raised in Spanish Fork, Jean and her sisters enjoyed dancing at every opportunity. Jean later graduated from Brigham Young University where she participated in piano competitions, performed in plays, and enjoyed being a song leader. Jean married Phyl G. Ekins on August 9, 1953, in the Logan Temple and had six children: Cindy (Mrs. Heber J. “Tiger”) Teerlink, Saratoga, California; Carrie (Mrs. Hans Junge) Ekins, Augsburg, Germany; Ronald G. (and Michelle) Ekins, Springdale, Missouri; Cris Ekins Kiser, Riverton; Courtney (Mrs. John K.) Johnson, Spanish Fork; Sandra (Mrs. Barry) King, Provo; 22 grandchildren and 18 great-grandchildren. The Ekins family lived in Texas and California where Phyl served as a fighter pilot in the US Airforce. They later lived in Provo where Phyl owned and operated Triple “E” Inc. with his father and brother. Throughout her life, Jean was very physically active and enjoyed dancing, jogging, and skiing. As a ski instructor, she taught hundreds of children how to ski at Timphaven (later Sundance) as well as Snowbird. Jean taught creative dance at Brigham Young University and taught with Virginia Tanner at Childrens’ Repertory Dance Theatre in Salt Lake City, Utah. Later, Jean used her piano skills to accompany dance lessons. Funeral services will be conducted at 11:00, Saturday, January 4, at the Edgemont 6th Ward Chapel, 4056 North Timpview Drive in Provo, Utah. Friends may call at the same location from 9:30-10:45 a.m. prior to services. Interment will be at the Provo City Cemetery. Condolences may be expressed at www.bergmortuary.com.

Jean Dixon Ekins, 86, wife of Phyl G. Ekins, died in her Provo home Tuesday, December 31, after battling cancer for more than five years. Jean was known for her support of fine arts and was one of the most revered special education teachers... View Obituary & Service Information

The family of Jean Dixon Ekins created this Life Tributes page to make it easy to share your memories.

Send flowers to the Ekins family.