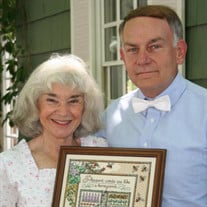 On 17 March 2022, our brave, beautiful, talented, intrepid wife and mother chose to transition from this life to the next. It seems fitting that this avid gardener and lover of cats chose the feast day of St. Gertrude of Nivelles, the Patron Saint of Cats and Gardeners. Jeannette Elizabeth Roth Woolf was born in Los Angeles, California 24 May 1936, the oldest child and only daughter of Carroll William Roth and Elizabeth Cleveland Quarles. She was a Campfire Girl as an adolescent, teenager, and young adult, and spent every summer for 13 years at Camp Waswagan, located in the Sierra Nevada mountains. A gifted artist, Jeannette chose to pursue a career as a Medical Illustrator, and attended the Medical College of Georgia in Athens, Georgia. To become a certified Medical Illustrator, one is required to take 3 years of medical school and have an impressive art portfolio. While there, she met fellow medical student Thomas Watson "Emory" Price, Jr. They were married in June 1962. Jeannette graduated from the Medical College of Georgia in June 1963 with a Masters Degree in Medical Arts. As a Medical Illustrator, surgeons could describe new procedures they were pioneering, such as arthroscopic knee surgery, and new procedures for rotator cuff repair. With those descriptions, she was able to create a series of illustrations accurately depicting the procedure and/or the new instruments that would be needed as well. Jeannette also excelled as a watercolor artist, with her primary subjects being landscapes and old barns. She loved taking watercolor classes, and learning to improve her skills. Tom and Jeannette were the parents of three children: Elizabeth, Thomas, and William. During their marriage, they lived in Byromville, GA, Cottage Grove, OR, and Montezuma, GA. Widowed at the age of 39, she moved 3 children, 2 cats, 4 kittens, and three large goldfish across country from Georgia to Utah, bought a house, turned part of the yard into a vegetable garden, and became as fiercely independent and self-sufficient as she could. Despite the challenges and financial hardships she faced, she introduced her children to many cultural events, was able to send each of them to Germany as part of an exchange program, and raised her children to be responsible, adventurous adults. A member of The Church of Jesus Christ of Latter-day Saints, Jeannette was actively involved in church activities, and delighted in sharing her love of nature, gardening, music, and genealogy with the members of her ward. One day, shortly after her children had all left home, John Woolf knocked on her door and commissioned her to cross-stitch a picture for him of a skep beehive. He began stopping by periodically to check the progress, then more and more often until he was stopping in daily. By the time it was completed, they were madly in love. They were sealed for Time and Eternity in the Provo Temple on 28 July 1988. Everyone who knew them could see and feel the love radiating from them. John and Jeannette loved participating with the Pioneer Heritage Company. With her attention to detail – she had been a costume mistress in her high school drama department - Jeannette ensured their costumes and activities were accurate to the period they were portraying. For many years, she was a docent at the BYU Museum of Art, and was particularly fond of the Egyptian exhibits, the blown glass of Dale Chihuly, and the paintings of C. C. A. Christensen. During her tenure with the BYU MOA, she received perhaps her greatest challenge: a thread-by-thread restoration to restore the Minerva Tichert famous “orange scarf” used in so many of Tichert’s early paintings. Both John and Jeannette were avid gardeners, and took great pride in their yard. With its split-rail fence, large trees, immaculate flower and vegetable beds, and goldfish pond, it was the talk of the town, and they received Provo City citations and District recognition for their yard and garden. John and Jeannette were dedicated and devoted to community. John was the first president of Habitat for Humanity in Utah County, and both of them were instrumental in helping create the Utah County affiliate for Habitat for Humanity. For years, on the first Sunday of every month, they would travel to downtown Salt Lake City to feed the homeless “under the viaduct” near Pioneer Park. For years, Jeannette also volunteered in the Deseret Industries Humanitarian Center for The Church of Jesus Christ of Latter-day Saints, helping create, assemble, and package supplies for worldwide relief operations. With her medical background, Jeannette was a volunteer for the American Red Cross during the 2002 Winter Olympics. Following her stroke in January 2011, John has been by her side almost constantly, caring for her in every way imaginable, never letting her forget his undying love for her. Her children are so very grateful for his example of unconditional love and compassion. Jeannette is survived by her husband John; her children Elizabeth Foote (James Foote), Thomas Price (Andie Grace), William Price (Jeni Austin); her stepchildren John Harper, Timberlyn, Sarah, and Kristen Woolf; her granddaughters Maren Christensen, Chloe Tolman, and Jamie Grace; her grandsons Nolan, Nathan, and Jason Foote; and her brother, Bill Roth; as well as her cousins, Betty Thompson and Sandra Asquith. Jeannette will be interred on Tuesday, 22 March 2022 at 10:30 a.m. at the Mount Olivet Cemetery, 1342 East 500 South, Salt Lake City, Utah. In lieu of flowers, please make a donation in her name to the charity of your choice. Condolences may be expressed to the family at www.bergmortuary.com. You are welcome to observe the graveside service via the following Zoom link, using passcode 891337 Zoom: https://us04web.zoom.us/j/71912792558?pwd=9NFs3OYQXilqoinAhEc5Nkb7WybInC.1

On 17 March 2022, our brave, beautiful, talented, intrepid wife and mother chose to transition from this life to the next. It seems fitting that this avid gardener and lover of cats chose the feast day of St. Gertrude of Nivelles, the Patron... View Obituary & Service Information

The family of Jeannette Elizabeth Roth Woolf created this Life Tributes page to make it easy to share your memories.

Send flowers to the Woolf family.