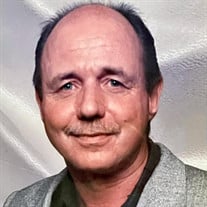 Jeffrey Davis Jameson passed away at home unexpectedly Sunday, August 22, 2021, in Las Vegas Nevada, at the age of 67. He was born to Harold Albert and Beverly Davis Jameson on February 26, 1954, in Provo Utah. He was the youngest of four children, raised in Orem, Utah. He joined the United States Army in 1971 during the Vietnam War and served 3 years. Jeff lived in Las Vegas, Nevada off and on throughout his life. He lived and worked at Dugway Proving Ground for 15 years, then returned to Las Vegas and worked as an HVAC Technician for several years before retiring there. After retirement he enjoyed spending time with family and friends and frequenting his local bar to place sports bets. He was an avid golfer and enjoyed golfing with his brother Harry, sister Jill, brother-in-law Eddie and nephew Darin. He was a die-hard Kansas City Chiefs and Utah Jazz fan, which he made obvious in his wardrobe selection and trash talk. Jeff had a boisterous, kind personality and was always the life of the party. Every now and then we meet someone who impacts our life more than others, Jeff was one of those people. He will be deeply missed by all who knew him. Survived by his sisters JannaLane (Sam) Bowler, Las Vegas, NV; Jill (Edward) Buys, Stansbury Park, UT; stepdaughter Alishia Hypes, Las Vegas, NV; many nieces and nephews that adored him, close friends Randy & Connie Jo Harris, Craig Butler, and many other lifelong friends. Preceded in death by his grandparents Charles and Alice Bourne Jameson, Paul Jasperson and Cuba Dayton Davis; parents Harold Albert and Beverly Davis Jameson, brother Harold Paul Jameson, nephew Edward Stacy Buys and Uncle Paul “Bud” Dayton Davis. Graveside services will be held at 1:00 p.m., Friday, September 10, 2021 at Eastlawn Memorial Hills, 4800 North 650 East, Provo, Utah. Condolences may be expressed to the family at www.bergmortuary.com.

Jeffrey Davis Jameson passed away at home unexpectedly Sunday, August 22, 2021, in Las Vegas Nevada, at the age of 67. He was born to Harold Albert and Beverly Davis Jameson on February 26, 1954, in Provo Utah. He was the youngest of four children,... View Obituary & Service Information

The family of Jeffrey Davis Jameson created this Life Tributes page to make it easy to share your memories.

Send flowers to the Jameson family.