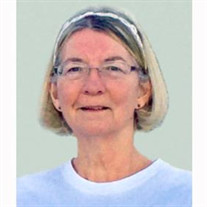 Jeralyn Morrison passed away peacefully in Kansas City, Missouri on June 20, 2020 from natural causes. Jeralyn was born in Bountiful, Utah on November 6, 1949. She was the second of three children born to Ira Angus Newsome and Maisie Newsome. She married Kent E Carlson in 1971 and later divorced. They had 2 children, Robert Scott Carlson and John Jay Carlson. She married Kenneth James Morrison on June 2, 1990 in the Jordan River Temple. Jeralyn was an active member of The Church of Jesus Christ of Latter-day Saints and was always faithful even though she was met with many trials during her life. She was a perfect example of selflessness, always thinking of others and putting the needs of others above herself. She was an avid BYU Cougar fan and loved to follow Major League Baseball. She had many hobbies that included reading, walking her dog Nelson, crafting, studying the gospel and spending time with her family. She loved serving as a Temple Worker in the Provo Temple and the Provo City Temple for many years. Jeralyn is survived by two sons, Robert Scott (Alexis) Carlson of Bountiful, Utah and John Jay (Abby) Carlson of Smithville, Missouri; sister, Barbara (Devan) Pack of West Bountiful, Utah; 9 grandchildren and two great grandchildren. She is preceded in death by her husband, Kenneth James Morrison; father, Ira Angus Newsome; mother, Maisie Newsome and sister, Carla Newsome. Graveside services will be held at 11:00 a.m., Friday, June 26, 2020 at the Provo City Cemetery, 610 South State Street, Provo, Utah. Friends may call at the Berg Mortuary of Provo, 185 East Center Street, from 9:30-10:30 a.m. prior to services at the cemetery. Condolences may be expressed at www.bergmortuary.com.

Jeralyn Morrison passed away peacefully in Kansas City, Missouri on June 20, 2020 from natural causes. Jeralyn was born in Bountiful, Utah on November 6, 1949. She was the second of three children born to Ira Angus Newsome and Maisie Newsome. She... View Obituary & Service Information

The family of Jeralyn Morrison created this Life Tributes page to make it easy to share your memories.

Send flowers to the Morrison family.