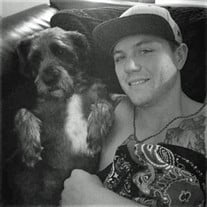 The world lost an amazing man when heaven gained a legend on Friday, April 14, 2017. The larger than life 28 year old, Jeremiah Scott Fazzio (Miah Imagine), died unexpectedly in his sleep at his home in Orem, UT. He is the incredible son of Scott and Patty Fazzio. Jeremiah has touched the lives of thousands of people across the world. He was a self-made entrepreneur that loved life and everything that went with it, even as a child. He started with karate at age 5 and finished his karate debut as a Jr. black belt and went on to race BMX. He holds the record to be the first kid in Utah to ever make 20,000 points in a single season. He conquered the BMX world after winning countless National and World competitions for his age and class and left that world for the desert rat life of motocross when he found out dirt bikes went faster without having to peddle them. Jeremiah attended Hillcrest Elementary, followed by Lakeridge Jr. High and on to graduate high school from Orem High. He went on to obtain his associates degree from UVU as a Wolverine. Football was a huge portion of his life. He never missed a game even after breaking his collarbone. Jeremiah had a love for the outdoors! You could find him snowboarding the beautiful mountains to waterboarding and boating on every lake he could get his boat on. There wasn't anything he wouldn't do. He earned the nickname Sonshine, by having those beautiful blue eyes and a disposition that could light up any day! He was loved by all. After high school, he ran a clothing line, an internet sales company, he was a concert promoter, and finally settled into a career as a partner of University Collision with his dad. Jeremiah has accomplished so much in the short time he was with us that no amount of words could sketch his life and capture the charisma and character of this amazing man. He had a heart of gold. He was larger than life and had a smile that could charm a woman wearing white gloves into eating a ketchup popsicle. Jeremiah is the definition of a life well lived and a minute never wasted. If you weren't on his level he made sure he pulled you up to his level. He is survived by his parents, Scott and Patty Fazzio; sister, Cassidy Goff; brother-in-law, Ben Goff; nephews, Grayson and Garret Goff; girlfriend, Britt Brost; grandmothers, Ada Fazzio and Rachael Case and all his aunts, uncles, cousins, friends and memories. He is preceded in death by his grandfather, Sam Fazzio; uncle, Kenny Fazzio; aunt, Tina Fazzio; grandpa, Roger Case and older brother, Scott Anthony Fazzio. Heroes are remembered, but legends never die and Jeremiah made sure he left a legendary footprint on your life if he ever crossed your path. Please avoid wearing black and come in the brightest colors you can. This is a celebration of his life well lived. It's what he would want. SERVICE ADDRESS CHANGE: Funeral services will be held at 11:00 a.m., Thursday, April 20, 2017 at Berg Mortuary, 500 North State Street, Orem, Utah. Friends may call at the Berg Mortuary of Provo, 185 East Center Street, Wednesday, April 19, from 6-8:00 p.m. and at the Berg Mortuary of Orem, Thursday from 10-10:45 a.m. prior to services. Interment, Provo City Cemetery. Condolences may be expressed at www.bergmortuary.com.

The world lost an amazing man when heaven gained a legend on Friday, April 14, 2017. The larger than life 28 year old, Jeremiah Scott Fazzio (Miah Imagine), died unexpectedly in his sleep at his home in Orem, UT. He is the incredible son of... View Obituary & Service Information

The family of Jeremiah Scott Fazzio created this Life Tributes page to make it easy to share your memories.

The world lost an amazing man when heaven gained a legend on...

Send flowers to the Fazzio family.