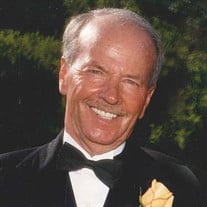 Our loving husband, father and brother passed away Thursday, November 6, 2014 at his home, in Provo, Utah. He was born December 9, 1932 to Einar Ludwig Christensen and Zola Hickman Preece. Jerry served in the U.S. Navy during the Korean War. He married Carroll Wasden in 1957 and later divorced. He married Loretta (Pratt) July 8, 2000. Jerry worked at Geneva Steel and retired in 1993. He loved the outdoors and especially fishing, hunting and camping. Spending time with his family creating memories was important to him. Traditions throughout the years include the “Deer Camp” early morning awakenings, fishing at Starvation, ATV family rides, “kids summer camp with Grandpa,” BYU football games and many more. Jerry had a special connection with his grandsons who have all been taught valuable life skills; he adored his granddaughters who all knew they were his favorite. Jerry would make you smile or even laugh out loud, with his amazing personality. He was a loving husband to Loretta and cherished their relationship. Hand in hand they did all sorts of adventurous outings usually cabin oriented and with friends or family. His companionship will be missed. Jerry is preceded in death by his parents, siblings James Christensen, Melba Groneman, Jackie Snow, Sally Savage, and is survived by his brother Max Christensen. He also leaves behind his wife, Loretta; his children, Brady (Charlene), Rick (Lisa), Cami Gyigi (Gary), Cory (Ali) and stepchildren Stephanie Deer(Garrett), Laurie Terry (Jeremy), and Ryan Pratt; 19 grandchildren and 2 great grandchildren. Funeral services will be held at 12:00 p.m., Wednesday, November 12, 2014 at the Lakeside 10th Ward Chapel, 2225 West 620 North, Provo, Utah. Friends may call at the Berg Mortuary of Pro-vo, 185 East Center Street, Tuesday, November 11, from 6-8:00 p.m. and at the church Wednes-day, from 11-11:45 a.m. prior to services. Interment, Orem City Cemetery. Condolences may be sent online at www.bergmortuary.com.

Our loving husband, father and brother passed away Thursday, November 6, 2014 at his home, in Provo, Utah. He was born December 9, 1932 to Einar Ludwig Christensen and Zola Hickman Preece. Jerry served in the U.S. Navy during the Korean War.... View Obituary & Service Information

The family of Jerry Eugene Christensen created this Life Tributes page to make it easy to share your memories.

Our loving husband, father and brother passed away Thursday,...