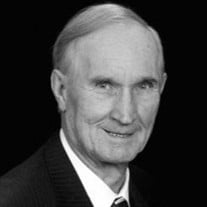 Jerry Levi Tanner, beloved son, husband, father, grandfather and great-grandfather passed from this world on March 18, 2019. He was born in Price, Utah, December 31, 1930 to Marcia Levi and James Owen Tanner. In 1947 he married his sweetheart, Shirley Waterman, and they enjoyed nearly 70 years of married life together before her passing in 2017. In 1959 Jerry moved with his family to Provo where he and Shirley raised their family and enjoyed being a part of the community. His greatest joys were his family and in helping others. He also enjoyed traveling, BYU sports, and golf with friends and family. He played golf regularly until age 87 and even paid a visit to Top Golf just two days before his passing. He had many professions, including construction, car reconstruction, insurance salesman, lumber, grocery store owner, and real estate. He is a member of The Church of Jesus Christ of Latter-day Saints. He is survived by his children: Marilyn (Lyle) Rodabough, Debra Werner, Ben (Pam) Tanner, Carolyn (Mark) Sullivan, and David (Natalie) Tanner, his brother Karl Tanner, nineteen grandchildren and forty-two great-grandchildren. He is preceded in death by his parents, wife (Shirley Waterman Tanner), brothers Douglas and James Owen Tanner, Jr, sister Helen, and his great-granddaughter Ashlynn Werner. Funeral services will be held at 2:00 p.m., Saturday, March 23, 2019 at the Berg Drawing Room Chapel, 185 East Center Street, Provo, Utah. The family will receive friends at the mortuary from 12:45-1:50 p.m. prior to services. Interment, Provo City Cemetery. Condolences may be expressed at www.bergmortuary.com.

Jerry Levi Tanner, beloved son, husband, father, grandfather and great-grandfather passed from this world on March 18, 2019. He was born in Price, Utah, December 31, 1930 to Marcia Levi and James Owen Tanner. In 1947 he married his sweetheart,... View Obituary & Service Information

The family of Jerry Levi Tanner created this Life Tributes page to make it easy to share your memories.

Send flowers to the Tanner family.