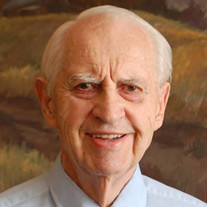 Jesse Richard (Dick) Brown, 89, of Provo, died April 16, 2014 in American Fork, Utah, after an extended illness. He was born April 3, 1925 in Ogden, Utah, to Jesse Doyle Brown and Orpha Faye Wootton Brown. Dick spent most of his growing up years in Ogden and graduated from Ogden High School in 1943. While at Ogden High, he met his future wife, Veone Menlove, when they worked together on the school newspaper. On a trip to get the newspaper printed, Dick treated Veone to a 10 cent malt and Veone later quipped, “He’s been paying for me ever since!” Upon high school graduation, Dick entered the army and served during World War II in the European Theater. He participated in the invasion of France and he also served in the headquarters of General Omar Bradley. He returned from Europe in July of 1945 and he and Veone were married July 18, 1945 in the Logan LDS Temple. Following the war, Dick enrolled at Brigham Young University and received a degree in elementary education in 1949. He began his teaching career at Grandview Elementary School in Provo. In 1953, he travelled to Iran as an educational consultant for the United States Government’s Point Four program, where he helped establish an improved school system in that country. He was joined in Ahwaz, Iran by his wife Veone and daughter Margaret, where they all shared a rich cultural experience. The family returned to Provo in 1955 via a trip through the Middle East, Europe and England and sailed home on the Queen Elizabeth ocean liner. Dick then resumed teaching at Maesar Elementary School. He completed his Master’s Degree in Education at BYU in 1957 and joined the education faculty at BYU, where he taught for 34 years and was a favorite teacher to thousands of students. Dick also did graduate work at Colorado State University, the University of Wisconsin and doctoral studies at the University of Denver. He was a founding member of the educational fraternity, Phi Delta Kappa, and served twice as its president. Dick served faithfully in many callings in the LDS Church, including gospel doctrine teacher, bishopric counselor, ward clerk, stake high councilor and as a bishop. He lovingly cared for his wife in their home during the twenty five years she suffered from multiple sclerosis. He provided his family with a legacy of faith and discipleship in the Gospel of Jesus Christ, loving kindness, integrity, lifelong learning, service, and a delightful sense of humor. He is survived by his children, Margaret (Dennis) Black of Orem, Gregory (Diane) Brown of Orem, and Susan (Randy) Mooney of Mapleton; 12 grandchildren; and 32 great grandchildren. He was preceded in death by his wife Veone after sixty years of marriage; parents, Jess and Faye Brown; sister, Shirley Faye Brown; brothers, Dale Brown and Alan Brown; and three great grandchildren. He also had a stillborn brother, David Brown. The family thanks the many kind caregivers and neighbors who have helped Dick in his later years, especially his longtime nurse and friend Dana Mutz. Funeral services will be held at 11:00 a.m., Thursday, April 24, 2014 at the Rock Canyon LDS Chapel, 2445 North Timpview Drive (650 East), Provo. Friends may call at the Berg Mortuary of Provo, 185 East Center Street, Wednesday, April 23, from 6-8:00 p.m. and at the church Thursday from 9:30-10:45 a.m. Interment, Provo City Cemetery. Condolences may be sent online at www.bergmortuary.com.

The family of Jesse Richard Brown created this Life Tributes page to make it easy to share your memories.