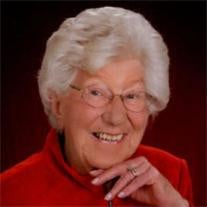 Joan Frommelt Pierce passed away peacefully in her home on June 22, 2011. She was born August 13, 1928 in Dubuque, Iowa to parents Harold John Frommelt and Elsie Kress Frommelt. Joan graduated from Dubuque Senior High School in 1946 and went to nurses training at Saint Joseph School of Nursing in Chicago, Illinois. After obtaining her nursing degree in 1949, she entered into the Army Nurse Corps. She honorably served our country from September 1952 until March 1955. She was stationed at William Beaumont Army Hospital in El Paso, Texas. It was there that 1st Lieutenant Frommelt began dating a handsome young 2nd Lieutenant, Wilford Vard Pierce of Sigurd, Utah. They were married in the Post Chapel on November 6, 1953. Their military service took them to Frankfurt, Germany, Minneapolis, Minnesota, Springfield, Virginia, and Fort Ord, California. Joan and Vard returned to the Pierce family home in Orem, Utah in 1971 following Vard’s medical retirement from the US Army. Vard succumbed to his service-related disability on October 24, 1976. Joan later married Donald E. Doty. He passed away July 8, 1993. Joan continued to serve her community as a member of Saint Francis of Assisi Catholic Church and as a volunteer at Timpanogos Hospital in Orem. Joan is survived by her children: Antoinette Pierce Houston and her husband Samuel Houston of Austin, Texas, Paul Wilford Pierce and his wife Lynda Ward Pierce of Alameda, California, and Jeffrey Harold Pierce of Salt Lake City, Utah. Joan has two loving granddaughters: Melanie Ann Houston married to Brandon Amaral, and Katie Marie Houston. Joan also has two siblings: Bill Frommelt lives in Dubuque, Iowa with his wife Kay Frommelt, and Marian McCarville lives in Marion, Iowa. Joan was preceded in death by her parents and both husbands. "It broke our hearts to lose you, but you didn’t go alone, for part of us went with you." Mass will be held at 11:00 a.m., Monday, June 27, 2011 at St. Francis of Assisi Catholic Church, 65 East 500 North, Orem, Utah. Friends may call at the Berg Mortuary of Provo, 185 East Center Street, Sunday evening from 6-8:00 p.m. with a Rosary at 7:00 p.m. Interment, Orem City Cemetery. In lieu of flowers, donations may be made to the building fund of St. Francis of Assisi Catholic Church in Joan Pierce’s name. Condolences may be sent to the family through www.bergmortuary.com.

The family of Joan Pierce created this Life Tributes page to make it easy to share your memories.

Joan Frommelt Pierce passed away peacefully in her home on June...

Send flowers to the Pierce family.