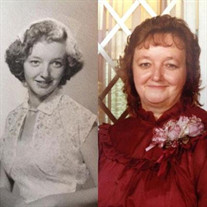 Joann Kuchenriter Draper, 78, passed away peacefully on December 4, 2015 from ailments incurred over the past several years. Joann was a loving wife, mother, grandmother, sister, aunt and friend. Joann is a faithful member of the Church of Jesus Christ of Latter-day Saints. Her love for our Father in Heaven and his son, Jesus Christ was unwavering throughout her life. She was born on May 17, 1937 as the 3rd of 5 children to William Charles and Johanna Doyle Kuchenriter in San Jose, California. Joann attended Elmwood Elementary, Franklin Jr. High and Stockton College High Schools before marrying Ralph Swank on Sept. 17, 1955 (divorced in 1982). She grew up living on Wagner Street in Stockton, CA. As a part of a marriage gift from her parents they split their lot in half and her family unitedly contributed their skills to build a home next door, where she lived for 26 years and raised four children and cared for her parents before later moving to Orem, Provo and eventually settling in Springville, Utah where she has lived for the past 10 years. Joann always had a thirst for education, eventually fulfilling her dream to go to college and earn a B.A. in Business Management from Utah Valley State College. It was at UVSC that she met and fell in love with Arthur Draper, who adored her and often surprised her with White Roses and wonderful discussions about the gospel and eternities. Married on June 22, 1994 (sealed on October 22, 1994), they spent 15 wonderful years together until he passed in 2009. She used her education and niche for business in many different jobs, including: Graveyard Shift Cook at the “Rollin Donut”, Bookkeeper at Woolworth’s, Clerk for the US Gov’t., Circulation Manager at John Buckles Publishing, Supervisor at Marri-Tots, Finance Clerk at UVSC, and Manager at Sears Teleservices. She was an extraordinary cook, seamstress and loved to crochet to which her family greatly benefitted over the years with many handmade items. Her greatest joys were her family and her membership in the church, and she made sure that everything she did intertwined the two together as Heavenly Father wanted. As a convert to the church she celebrated her baptism annually and loved to study and teach the gospel. She has a keen understanding of the Plan of Salvation which she energetically shared as a Primary Teacher, Counselor and President, Gospel Doctrine Teacher, Nursery leader, and Ward Librarian. Her true passion was Genealogy where she personally researched, extracted and submitted thousands of family names, and served for over 20 years as a Ward & Stake Genealogy Teacher, Librarian and Extraction Specialist. She wrote and published Family History manuscripts which are treasured by her family. The mother of four children; Cherie Barbre, Robert (Tammy) Swank, Christopher (Michelle) Swank, Tamela (Chad) Larkin; she has 26 grandchildren and 33 great grandchildren. She is survived by her children, grandchildren, great grandchildren, sisters Rosemary Knight and Gay (John) Hughes, and brother Ted Kuchenriter; Sister-In-Laws, Cousins and many lifelong friends. She was preceded in death by her husband Arthur, parents, brother Louis Charles, and grandson Ashton Larkin. Funeral services will be held at 11:00 a.m., Wednesday, December 9, 2015 at the Spring Creek 18th Ward Chapel, 235 East 550 North, Springville, Utah. Friends may call from 9:30-10:45 a.m. prior to services. Interment will be held at Timpanogos Memorial Gardens, 1000 N. 400 East, Orem, Utah. Condolences may be extended to the family at www.bergmortuary.com.

Joann Kuchenriter Draper, 78, passed away peacefully on December 4, 2015 from ailments incurred over the past several years. Joann was a loving wife, mother, grandmother, sister, aunt and friend. Joann is a faithful member of the Church of Jesus... View Obituary & Service Information

The family of Joann Kuchenriter Draper created this Life Tributes page to make it easy to share your memories.

Send flowers to the Draper family.