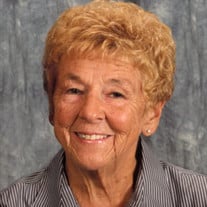 JoAnn Moore Mitchell, 79, of Provo, Utah, passed away peacefully on Apr. 11, 2014 surrounded by her family. She was born Aug. 11, 1934 in Provo, Utah to Melvin W. and Edna H. Moore. JoAnn grew up and attended schools in Provo and graduated from Provo High School. JoAnn met her husband, J. Earl Mitchell, and was married Nov. 28, 1952. The two made their home in Provo and started a loving family consisting of three sons, Michael, Patrick and Danny. JoAnn was a devoted mother and would do anything for her children, grandchildren and especially her great-grandchildren, her family was her world. JoAnn had a love for aviation. She worked at the Provo Airport for Myron W. Jense (Central Utah Aviation) for almost 25 years. She then went to work for Albertson’s, where she was the bakery hostess until she retired. For many years JoAnn enjoyed bowling on a bowling league. She was a loyal Pittsburgh Steelers fan, and hardly ever missed a game. One of her biggest joys was going to Three Rivers Stadium to watch a live game. JoAnn kept an immaculate house and yard, where friends and family were always welcome and entertained. She had a great love for the outdoors and enjoyed hunting and fishing at Strawberry and Fishlake. She also enjoyed gardening and loved traveling with her family. She will be deeply missed by her family and friends and forever in our hearts. She is survived by her children, Patrick D. Mitchell and Danny L. (Jill) Mitchell of Provo, UT; 12 grandchildren and 16 great-grandchildren. She is preceded in death by her parents, Melvin and Edna Moore; her husband, John E. Mitchell; son, Michael E. Mitchell; sister, Betty (Moore) Brereton; and brothers, William (Bill) Moore and Richard V. Moore. The family would like to thank the Provo Beehive Home and Brighton Hospice for their tender care. Funeral services will be held at 11:00 a.m., Friday, April 18, 2014 in the Berg Drawing Room Chapel, 185 East Center Street, Provo, Utah. Friends may call at the mortuary, Thursday evening from 6-8:00 p.m. and Friday from 10-10:50 a.m. prior to services. Interment will be in the Provo City Cemetery. Condolences may be sent through her obituary at www.bergmortuary.com.

JoAnn Moore Mitchell, 79, of Provo, Utah, passed away peacefully on Apr. 11, 2014 surrounded by her family. She was born Aug. 11, 1934 in Provo, Utah to Melvin W. and Edna H. Moore. JoAnn grew up and attended schools in Provo and graduated from... View Obituary & Service Information

The family of JoAnn Moore Mitchell created this Life Tributes page to make it easy to share your memories.