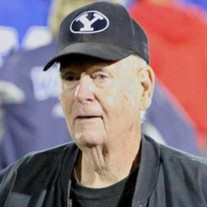 Joe C. Scott, age 88 passed away February 18,2022 in Lindon, Utah. Joe was born October 8, 1933, to Lynn and LaVon Scott. He was Raised in Provo, and graduated from Provo High. He married Ramona Taylor in 1958. They raised 3 boys, Rick (Jana) of American Fork, Mike (Ila) of Pleasant Grove, and Kelly of Eagle Mountain. They were later divorced. He was preceded in death by his parents and one grandson, (Stephen Scott). Joe was in the Army where he was stationed in Alaska for a few years. After leaving the Army he started working for Granite Furniture. He was employed there for about 45 years. Joe was active in The Church of Jesus Christ of Latter-day Saints and served in many callings. He served in 12 different High Priest Stake Leaderships, he also served for 1 year in the Provo Temple, and served 2 years at the Lindon Cannery. He was an avid BYU fan, he always had to be around so he could watch a game. He was always talking about BYU sports, and if you didn't know something about BYU, Joe probably knew it. Joe was the best father and grandpa, he always made time to be there for his sons and grandchildren. He leaves behind 5 grandkids, Micah, Taylor, Jessica, Cody, Kobee and 10 great grandchildren. He loved to talk to people and make others laugh. He was our social butterfly, but he denied it when we asked him about it. We would like to thank the staff of Rocky Mountain-Grove Creek for the care they provided, along with Encompass Home Health. Location change - services will be held at 11:30 a.m., Friday, February 25, 2022, at the Berg Drawing Room Chapel, 185 East Center Street, Provo, Utah. Friends may call at the from 10-11:00 a.m. prior to services. Interment will follow at the Provo City Cemetery. Condolences may be expressed to the family at www.bergmortuary.com.

The family of Joe C. Scott created this Life Tributes page to make it easy to share your memories.