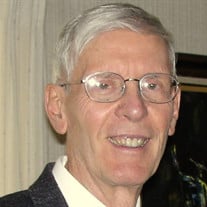 John Alfred “Jack” Thomas, beloved husband, father, brother, uncle, grandfather, and great-grandfather, passed from this life on December 5, 2015 in Provo, Utah following a brief illness. Jack will be remembered for his kind, gentle, and patient personality, his wisdom and intelligence, his great knowledge and skill as a professor of English literature, his love for gardening, and his light and cheerful sense of humor. Jack was born April 11, 1928 to Mary Adeline Ricks Thomas and William Emery Thomas in Sugar City, Idaho. Growing up near Island Park and Yellowstone, he loved to fish and to enjoy the outdoors with his father and his friends. He attended schools in Sugar City, graduating from Sugar-Salem High where he lettered in track in 1946. Following his graduation, he attended Ricks College for two years after which he served a mission for the LDS Church in Uruguay from 1948-1951. Upon returning, Jack enrolled at BYU where he met the lovely red-haired JoAnn Hebertson whom he married June 8, 1955 in the Salt Lake Temple. After completing both bachelor’s and master’s degrees in English at BYU, he and JoAnn welcomed twin daughters, Julianne and Janelle, in 1957, and shortly afterward they moved east to Greenbelt, Maryland, where Jack undertook doctoral studies at the University of Maryland in College Park. Jack studied Renaissance English literature, accessing both the Library of Congress and the Folger Shakespeare Library for his research. Their son, Karl, joined the family in 1959 during their student years in Maryland. After completing his Ph.D., Jack was appointed to the English Department faculty at BYU and the family returned to Utah Valley in 1962. They built a home in the Pleasant View 1st Ward in Provo in 1963, where they remained permanently thereafter. The family welcomed another daughter, Alexandra, that summer as well. Their fifth and final child, Stephen, was born in 1967. In 1968-69, Jack took a sabbatical leave from the university, and the family spent a year in Bogotá, Colombia, where Jack taught at the Centro Colombo-Americano Binational Center. Jack was an outstanding scholar and writer, presenting and publishing many scholarly papers in the course of his career of 30 years at BYU. He and JoAnn also enjoyed many years of stimulating discussions and friendship with their Great Books study group. Always a faithful member of the LDS Church, Jack served in many callings including as counselor in the Pleasant View 1st Ward bishopric, as bishop in a BYU campus ward, and on a BYU stake high council. He and JoAnn also served a mission in the temple at Villahermosa, Mexico. John served in the temple presidency and JoAnn served as assistant temple matron. Upon their return to Utah, Jack continued his temple service as a sealer in the Provo Temple. Jack was preceded in death by his wife JoAnn, his brother Grant, and a daughter-in-law, Elizabeth Thomas. He is survived by his children Julianne Thomas Blickfeldt (Bradey), Janelle Thomas Martin (Tom), Karl Thomas (Elizabeth, deceased), Alexandra Thomas Dixon (David), and Stephen Thomas (Susan), 15 grandchildren, and 16 great-grandchildren. He is also survived by his sister Ruth (Harold, deceased) Dowdle. His grandchildren include: Deborah Blickfeldt Buckner (Ben); Scott Blickfeldt, Stephanie Blickfeldt Willmore (Brent), Gregory Blickfeldt; Charles Martin (Annette), Allison Martin Peterson (Chris), Ashley Martin Stubbs (Sam), Angela Martin; Andrea Dixon Reed (John), Kevin Dixon (dear friend, Angela), Lauren Dixon; Anne Thomas, Emily Thomas, Benjamin Thomas, and Clara Thomas. Great-Grandchildren include: Whitney, Lily, and Owen Buckner; Charlie, Henry, and Elizabeth Martin; John, Tanner, Will, Brooke, Holly, and Andrew Peterson; and Martin, Eve, Esther, and Mercy Stubbs. Funeral services will be held at 11:00 a.m., Saturday, December 12, 2015, at the Pleasant View 1st Ward Chapel, 650 East Stadium Avenue, Provo, Utah. Friends may call at the church Friday, December 11, from 6-8:00 p.m. and Saturday from 9:45-10:45 a.m. prior to services. Interment, Provo City Cemetery. Condolences may be sent online at www.bergmortuary.com.

The family of John Alfred "Jack" Thomas created this Life Tributes page to make it easy to share your memories.