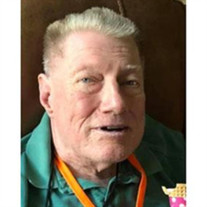 John Marshall Blackburn, 88, passed away on May 17, 2021, of natural causes. Born January 12, 1933, John was laid to rest on May 24,2021 at the Evergreen Cemetery in his hometown of Paris, Texas. John had a great sense of humor, loved classic movies, and Dr. Pepper. Always an avid student, John graduated high school at the age of 16, attended Paris Junior College, and then East Texas State. He earned his BA degree in journalism and had dreams of becoming an actor. After serving 2 years in the United States Army, John moved to Los Angeles, California, where he married Ellen Lucille Knight on October 10, 1959. John began his working career in the camera department of the May Company. In early 60’s Los Angeles, he was hired at the County Assessor’s office appraising properties. He went on to earn his Juris Doctorate degree in 1976 after attending Southwestern University School of Law in night classes, while simultaneously serving on the school board of the Rowland Unified School District. He then worked for the Los Angeles County District Attorney’s office in the child support division. John later branched out into private practice, but realized that what he really wanted to do, was teach. Dr. Blackburn was hired as a professor at Cal State University Los Angeles, teaching law classes and eventually becoming the head of the business law department. Upon retiring and in response to his beloved’s wife’s growing dislike of Southern California’s heat, John relocated to the charming town of Chehalis, Washington. They enjoyed attending the local high school football and basketball games. A photographer for most of his life, John left his children a wonderful legacy of photographs of their lives and of his many travels around the world. He traveled to every continent on the planet, with the exception of Australia. If given enough time, he would have captured it in his lens as well. John in preceded in death by his mother, Ruby Estelle Miller Blackburn; his sister, Pamelia Ann Blackburn Urbano; and his dear wife, Ellen Lucille. He is survived by his two daughters, Karen Victoria Blackburn and Tracy Lauren Whitlock; also his grandchildren, Madelyn Blue Whitlock and Cody Marshall (Ashley) Whitlock. In John’s own words, “My romance with the camera began quite early and evolved into a medium of self-expression, and a tool of communication. Through my images I seek to provoke emotions, inspire, and entertain”. Condolences may be expressed to the family at www.bergmortuary.com.

John Marshall Blackburn, 88, passed away on May 17, 2021, of natural causes. Born January 12, 1933, John was laid to rest on May 24,2021 at the Evergreen Cemetery in his hometown of Paris, Texas. John had a great sense of humor, loved classic... View Obituary & Service Information

The family of John Marshall Blackburn created this Life Tributes page to make it easy to share your memories.

Send flowers to the Blackburn family.