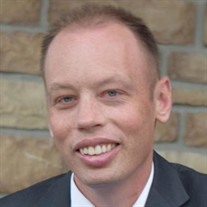 John Michael Clayton, 32, beloved husband, father, son, brother, and friend, was born February 22, 1984 to Dan & Mary Ann Clayton in Burley, Idaho. He passed away late on January 5, 2017 after a brave, hard and long fight with Stage 4 Alveolar Rhabdomyosarcoma. He grew up on a dairy farm where a deep love of hard work and the outdoors was instilled. He enjoyed working and even bragged that he was such a good worker and started at such a young age that he would change his own diapers while out working. He has many fond memories of working with siblings and extended family while on the farm. He loved four-wheelers, soccer, and scouts in his teenage years. He always enjoyed bringing friends to his house, both while growing up and in college. He served an LDS Mission in Malaga, Spain, and always spoke of taking Kelli there someday. Right after his mission in 2005 at BYU, he unknowingly met the love of his life, Kelli. Over the next two years, they played a lot of racquetball and ate a lot of Frosties. Kelli left for Cape Cod in the spring of 2007 and surprised John by keeping in touch with him. Over the summer they found that they loved each other. In November 2007 they were sealed for time and eternity in the Monticello UT LDS Temple. John graduated from BYU in May 2009 in Construction Management. His brother, Curtis, introduced him to construction and John found that he had a passion for building. He found a job at Westland Construction and had so much fun working on so many projects. After a couple years there, he started working closely with Stan Houghton and learned and watched how to be a good, honest, smart businessman as well as a family man. John formed many close friendships at Westland and loved those he worked with. John took great care in taking care of Kelli and their dear three boys as they came along. His boys knew dad could fix anything and that dad would always share candy, hot chocolate and good food. John took care of anybody who asked for help or advice. He was full of wit, wisdom, and mischief. He loved sharing what he loved. He especially loved gathering with his siblings and always enjoyed those who were around and missing those who couldn’t make it. While John wasn’t a huge Rascal Flatts’ fan, he was fond of fast cars and freedom. He was able to buy and enjoy both a Pontiac G8 GXP and a Cadillac CTSV. Accelerating super fast always put a smile on his face. His boys all loved riding in dad’s fast cars. He had a passion for traveling and loved asking people where they planned to travel next. He loved his trips to Fiji, Puerto Rico, Alaska, Panama, Russia, and all over the US. Most movies we watched, he could say that he’d been there. He especially enjoyed taking his boys to Disneyland, the beach, Yellowstone, camping, and all over New England. John is preceded in death by his dear Grandpa and Grandma Clayton and Uncle Jack Clayton. He is survived by his sweetie, Kelli, his 3 amazing boys: Carson, Thomas, and Daniel; his parents who were also his best friends, Dan and Mary Ann Clayton; siblings he adored and loved: Chelsea (Andy) Bingham, Curtis (Shauna) Clayton, Kimberly (Adam) Pierson, and Brent (Ashleigh) Clayton; Grandma and Grandpa Gerratt; his parents-in-law, Warren and Beverly Thomas; siblings-in-law; many adored nieces, nephews, aunts, uncles and cousins. Our six-year old Carson says, “We all love him.” Funeral services will be held at 11:00 a.m., Thursday, January 12, 2017 at the Canyon Pointe Ward Chapel, 2162 East Canyon Road, Spanish Fork, Utah. Friends may call at the Berg Mortuary of Provo, 185 East Center Street, Wednesday, January 11 from 6-8:00 p.m. and at the church Thursday from 9:30-10:45 a.m. prior to services. Interment, East Lawn Memorial Hills. Condolences may be expressed at www.bergmortuary.com. In lieu of flowers, please send donations to www.kyleesdancingangels.org.

The family of John Michael Clayton created this Life Tributes page to make it easy to share your memories.

Send flowers to the Clayton family.