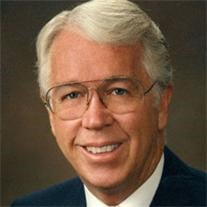 John Dilworth Wagner, 83, died April 19, 2013 at his home in Provo, Utah. He was born in Salt Lake City, Utah on October 7, 1929 to William and Elma Haymond Wagner. He was the second of two children. During his youth he worked at his father's lumber yard in south Provo, and learned to appreciate the virtues of hard work. He graduated from Provo High School in 1946 and was the Editor of the yearbook for his graduating class. He moved on to attend Brigham Young University, and graduated with a degree in Commercial Art. He was a Korean War veteran with the rank of sergeant, and was honorably discharged in 1951 with the bronze star service medal. After returning he met the love of his life, Mary Jean Whitehead and was married in August of 1954 in Salt Lake City, and the marriage was later solemnized in the Salt Lake LDS Temple. He was an avid golfer, loved the arts and spent many days skiing at Alta, Park City, and Timp Haven. He was an outdoorsman in every sense and was one of the "originals" at Strawberry reservoir. He trained his own Labrador retrievers and German shorthaired pointers, and spent many days hunting pheasants and waterfowl in Idaho and Utah. He was a BYU season ticket holder with football and basketball for over 50 years. He had a special love of gardening and working the land, growing award winning Begonias and the best corn Provo has ever tasted. He was devout in his faith and had many callings in the LDS church serving in his local ward and stake and on campus at BYU. He worked for Agfa Corporation, a European graphic arts company for 30 years. He traveled extensively including numerous trips to Europe. He achieved great professional success, winning many awards and at retirement he was the District Sales Manager for the Pacific region. He was loved and respected for his incredible work ethic and integrity by everyone who knew him. After retirement from Agfa he couldn't stop working, and took on a role with Royce Photographics as a Vice President for another 6 years. He was a family man in every sense of the word, devoting his time and treasure with his children. He is survived by his wife Jean of 58 years, and children Linda (Ron) Daley of Provo, Chris (Erin) Wagner of Akron Ohio, Pat (Kristy) Wagner of Sandy, and Jennifer (Zachary) King of Mission Viejo California, sister-in-law Polly Wagner, numerous cousins, nieces, and nephews. He also has 12 grandchildren and two great-grandchildren. He is preceded in death by two sons Mark and Robert Kirk, his parents, and brother Walt Wagner. The family wishes to thank Dignity Healthcare and especially Barbara Diamond and the aides for the loving care they provided John. Funeral services will be held at 11:00 a.m., Wednesday, April 24, 2013 at the Edgemont 21st Ward Chapel, 2900 North Timpview Drive, Provo, Utah. (No prior visitation will be held.) Friends may call at the Berg Mortuary of Provo, 185 East Center Street, Tuesday, April 23 from 6:00-8:00 p.m.. Services will be followed by the interment at East Lawn Memorial Cemetery. Condolences may be sent through his obituary at www.bergmortuary.com.

John Dilworth Wagner, 83, died April 19, 2013 at his home in Provo, Utah. He was born in Salt Lake City, Utah on October 7, 1929 to William and Elma Haymond Wagner. He was the second of two children. During his youth he worked at his father's... View Obituary & Service Information

The family of John "Dil" Wagner created this Life Tributes page to make it easy to share your memories.