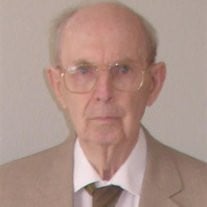 John T. “Jack” Harrison, 93, passed away peacefully on Wednesday, Aug. 21, 2013, in Snowflake, Ariz. A graveside service will be held in Provo, Utah, where he will be interred with his late wife, Lynn. He was born Sept. 4, 1919, in Manti, Utah, to James Eugene and Blanche Evelyn Bird Harrison. The family moved to Provo while he was in grade school. Jack graduated from Provo High School in 1937, and attended Brigham Young University on a music scholarship, graduating in 1942 with a Bachelor of Science degree in math. Upon graduation he was drafted into the Army and played first French horn in the Army Post Band at Camp Wolters Texas. Toward the end of World War II the band was split up and he was sent to Germany, where he fought until the end of the war. Following the war he attended the Los Angeles College of Optometry on the GI Bill, receiving his doctorate in 1949. He practiced optometry with his father, later taking over the practice until he retired in 1986. He was president of the Utah Optometric Association for several years. He met Geraldine Christensen at BYU. They were married Aug. 9, 1945 in Safford, Ariz. They had four children, and were divorced in 1968. He married Lynn Spaugy Peterson in October 1968. They enjoyed camping and boating; spending many hours enjoying the outdoors. Jack always enjoyed photography and had a stereo camera that he enjoyed. He developed his own pictures. He loved music and was instrumental in organizing the Utah Valley Symphony Orchestra. He was a member of the Provo Rotary Club for 27 years. Following the death of his wife, Lynn, he moved to Taylor, Ariz., to live with his daughter Naomi. Survivors include his children, Naomi Hatch of Taylor, Dorothy Evelyn Harrison of Glendale, Ariz., John Eugene (Ann) Harrison of Rose, Okla., and Victor Chris (Theresa) Harrison of Laupahoehoe, Hawaii; 11 grandchildren; 16 great-grandchildren and 15 great-great-grandchildren. He was preceded in death by his wife of 40 years, Lynn; two sisters; a brother; two grandsons, John Robert Harrison and Jonathon Kunoa Dauphinee; and a great-grandson, Casey Joseph Anderson. Graveside services will be held at 11:00 a.m., Friday, August 30, 2103 at the Provo City Cemetery, 610 South State Street, Provo, Utah. Condolences may be sent through his obituary at www.bergmortuary.com.

The family of John T Harrison created this Life Tributes page to make it easy to share your memories.

Send flowers to the Harrison family.