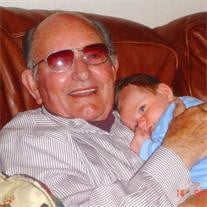 John Lyne (Jack) Roberts was born May 15, 1930 to John Lyne and Maude Elizabeth Roberts, referred to by Jack as goodly parents. One of his most poignant memories was the summer his older sister Marie worked at her first real job. From her earnings she bought Jack a horse. Jack named the horse Smoky. Both Jack and the horse were 7 years old at the time and were companions for 28 years. Together Smoky and Jack explored the area and mountains now know as Edgemont. He came to love this part of Provo, so after his marriage and tour of duty in the Army, Jack and Liza purchased orchard property there and built their home, where they have lived and raised their family. His love affair with his sweetheart Liza (Elizabeth Goold Roberts) has lasted 60 years. They were married in the Salt Lake Temple on November 14, 1950. They enjoyed life together. Both were good dancers and shared this love with friends. Together they were great sports fans and members of the Cougar Club. It did not matter what the activity was, they supported one another. Jack has been on over 21 wagon trains in different parts of the country and while Liza rarely rides, she has accompanied her companion in buggies and wagons. They also loved searching where ever they traveled for antique treasures and have come home with antiques and even horse buggy parts tied to the top of the family car. They were members of the Utah Valley Old Car Club for over 20 years making life long friends and providing delightful recreation for their family traveling very slowly over all parts of rural Utah. Gardening has also been a hobby they worked at together. While Liza loved the flowers and Jack produced the food they worked side by side. Jack especially took pride in his raspberry patch. Their small farm complete with orchards and animals has not only provided food for family and friends, but also a magical place of imagination and lessons of hard work for their own children and grandchildren as well as the neighbors who call them Gwa and Pompa. When speaking of Liza, Jack says with tears in his eyes, she has been a wonderful helpmate. Throughout his life, Jack has treasured the association with his siblings who all live in the area, serving one another. He is survived by his three older sisters Anne Williams, Marie Ridge, and LaRae Deaton. Jack was a General Contractor by profession. He earned a degree in Architectural Design from Brigham Young University. He has designed and built several commercial buildings and homes in Utah. He appreciated the employees, other area contractors and sub contractors with whom he has worked over the years. He has loved the many young men with whom he has worked and served beside. The company, J. Lyne Roberts and Sons started by Jacks Father, continued by his son and grandsons will celebrate 100 years of business this year. Jack was a member of the JC community service club. The friendships he and Liza have developed over the years have been valued and joyful! As an active member of the Church of Jesus Christ of Latter-day Saints, Jack has served in many positions. His strongest memories are of the years he served as Bishop of the Edgemont 3rd Ward and the year he was able to use his talents to oversee the construction of the park in his home stake. One of the highlights of his life was teaching 6 of his grandsons many aspects of home building as his son’s family worked to design and build their dream home. It took 2 years, plenty of patience and lots of love, creating priceless memories. Horseback riding is the passion he most loves to share with his children and grandchildren. Oh the stories we could and do tell of these adventures! Jack has adored and is survived by all of his children, John Greg (JoAnne) Roberts, Rosemary Roberts, Carrie Lyn Roberts, Lesa Anne (Mark) Carter, 12 grandchildren and 15 great grandchildren. He has devoted his life to the comfort and happiness of his family. Funeral services will be held at 11:00 a.m., Wednesday, July 20, 2011 at the Edgemont 3rd Ward Chapel, 2950 North Canyon Road, Provo. Friends may call at the Berg Mortuary of Provo, 185 East Center Street, Tuesday evening from 6 until 8 p.m. and at the church Wednesday morning from 9:30-10:45 a.m. prior to services. Interment, Provo City Cemetery. Condolences may be sent to the family through www.bergmortuary.com.

John Lyne (Jack) Roberts was born May 15, 1930 to John Lyne and Maude Elizabeth Roberts, referred to by Jack as goodly parents. One of his most poignant memories was the summer his older sister Marie worked at her first real job. From her earnings... View Obituary & Service Information

The family of John (Jack) Roberts created this Life Tributes page to make it easy to share your memories.