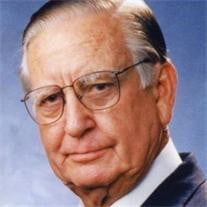 John Winston Mercer (Wick), 92, died June 16th due to complications from a fall. Winston was born in McGrath, Alberta, Canada, on January 29,1920. His parents were Jared Alma and Annie Catherine Millard Mercer. After a few years in Canada, the family moved to Oakley, Idaho, where Winston grew up. He graduated from Oakley High and then moved to Provo where he attended BYU. Winston played the trumpet and while at BYU he played in the BYU band and also started his career of playing in dance bands. One summer he worked at Bryce Canyon playing in the dance band where he met his sweet future wife, Ruth B Robison. As a child, he had contracted polio and always walked with a slight limp. This was not enough to keep him from athletic activities or from being drafted into the Army. He served his country in California and Fort Bliss, Texas. Winston and Ruth were married in 1945 in Texas. When he was released from the Army, he returned to teaching. He taught English, French and Journalism at BYU High School. He had many fond memories of this time and remembered many of his former students. After 13 years there, he went into the sales and insurance fields. He was preceded in death by his parents, sister Alma Mercer, sister Janice Cranney. He is survived by one sister, Marjorie (J.D.) Evans of Lake Oswego, Oregon, his wife, Ruth, and seven children: Gary W (Susan) Mercer, Patricia (Sherlan) Ligman, Catherine (Randal) Brereton, Phillip (Karla) Mercer, Melinda Mercer, Susan Urie, and Randall Mercer. He has 19 grandchildren, and 30 great-grandchildren. Winston loved his family. We all have fond memories of vacations, Sunday drives, and big family parties in the back yard. He had a sweet tooth and always had a stash of candy beside his recliner. Music was an important part of his life. He played his trumpet as long as he could and then switched to the keyboard. He was very clever and could easily write limericks and humorous poetry. He helped form the Civil Service Commission of Provo, and enjoyed his involvement with City government. He was a member of the LDS Church, and held many teaching positions in his ward. It was very hard for Winston to get around the last few years of his life, but he was very social and enjoyed his many friends at the Orem and Provo Senior Citizen Centers. Dad, we love and miss you, but we know you are enjoying a grand reunion with all your family who have passed on before you. Funeral services will be held at 11:00 a.m., Wednesday, June 20, 2012 at the Berg Mortuary, 185 E Center Street, Provo, Utah. Family and friends may call from 9:30 to 10:45 a.m., on the morning of the funeral service. Interment at Provo City Cemetery. Condolences may be sent through his obituary at www.bergmortuary.com.

John Winston Mercer (Wick), 92, died June 16th due to complications from a fall. Winston was born in McGrath, Alberta, Canada, on January 29,1920. His parents were Jared Alma and Annie Catherine Millard Mercer. After a few years in Canada,... View Obituary & Service Information

The family of John Mercer created this Life Tributes page to make it easy to share your memories.

Send flowers to the Mercer family.