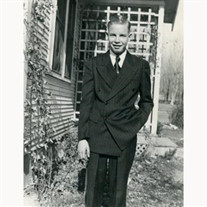 John Kenneth Miles passed from this life on December 2, 2018. He was born in Price, Utah on December 20, 1926 to Francis Marion Miles and Nettie Potter Miles. He attended school in Price, Utah and graduated from Carbon Jr. College and Brigham Young University. He also attended graduate school at the University of Utah. After graduating from Carbon High School in 1945, John was drafted into the U.S. Army. He reported for duty at Fort Douglas and trained at Fort Leonard Wood. John served in the Japanese Occupation forces until he was honorably discharged at the rank of Corporal in 1947. He was a stalwart and proud member of The Church of Jesus Christ of Latter-day Saints all of his life. He served a mission in Norway from 1948 to 1950. Along with multiple church callings, John served as a temple ordinance worker in the Chicago Illinois Temple, Toronto Canada Temple (mission), Provo Utah Temple and the Jordan River Temple. John loved his family and the Gospel. He also had a great love of sports. He played tennis in high school and college and was also a great bowler and golfer. He was taught to golf by his father and passed on his love of golf to his children. He was especially proud of his three holes-in-one. In his final days he kept mentioning the years he spent golfing at Hobble Creek in Springville. John was married to Theone Koeven in the Logan Utah Temple on July 23, 1951. They were blessed with five children: Michael Jon Miles, Kerry (Carolyn) Miles, Marcia (Gary) Nielsen, Regan (Debra) Miles, and Maurine Lee. He is very proud of his 14 grandchildren and the newest generation of great grandchildren. He is loved by many nieces and nephews. He worked most of his life as an accountant and auditor. He started work for the Electromotive Division of General Motors in 1959 and was transferred to the main plant in LaGrange, Illinois in 1964. They lived in Darien, Illinois for the next 25 years. John retired in 1988 and moved with Theone back to Provo, Utah. John was preceded in death by his parents, wife Theone, sisters Jean Westwood and Shirley Gates Farquhar, brother David Miles, son Michael, and daughter-in-law Shauna Miles. Funeral services will be held at 11:00 a.m., Wednesday, December 5, 2018 at the Berg Drawing Room Chapel, 185 East Center Street, Provo, Utah. Friends may call from 9:30-10:50 a.m. prior to services. Interment will be at the Provo City Cemetery, 610 S. State Street, Provo, Utah. Condolences may be expressed at www.bergmortuary.

John Kenneth Miles passed from this life on December 2, 2018. He was born in Price, Utah on December 20, 1926 to Francis Marion Miles and Nettie Potter Miles. He attended school in Price, Utah and graduated from Carbon Jr. College and Brigham... View Obituary & Service Information

The family of John Kenneth Miles created this Life Tributes page to make it easy to share your memories.

Send flowers to the Miles family.