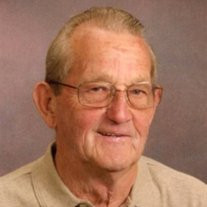 John Earl Mitchell, 86, of Provo, Utah, passed away peacefully on Dec. 2, 2013. He was born Sept. 28, 1927 in Provo, Utah to John S. and Kate Ellison Mitchell. Earl served honorably in the U.S. Navy during WWII and the Korean War. Earl later met the love of his life, JoAnn Moore, whom he married Nov. 28, 1954. They recently celebrated their 61st wedding anniversary. The two made their home in Provo and started a loving family consisting of three sons, Michael, Patrick and Danny. Earl learned the sheet metal trade from his father. Together they owned and operated Mitchell Sheet Metal for several years. Earl then went on to work for Gudgell Sheet Metal where his reputation in the trade allowed him to leave his legacy on many well-known structures throughout the state. Earl was a very social person and enjoyed being actively involved with many community organizations throughout his life, most recently the Elk’s Lodge. Earl enjoyed gardening, cooking, crossword puzzles and loved traveling with his family. He will be missed by his family and friends. He is survived by his wife, JoAnn Moore Mitchell; children, Patrick D. Mitchell and Danny L. (Jill) Mitchell of Provo, UT; 12 grandchildren; 16 great-grandchildren; and siblings, Kathryn (Kay Crabtree) and Alan (Nelda) Mitchell. He was preceded in death by his parents; son, Michael E. Mitchell and sister, Marilyn Bingham. Funeral services will be held at 11:00 a.m., Thursday, December 5, 2013 in the Berg Drawing Room Chapel, 185 East Center Street, Provo, Utah. Friends may call at the mortuary, Wednesday evening from 6-8:00 p.m. and Thursday from 10-10:50 a.m. prior to services. Interment will be in the Provo City Cemetery. Condolences may be sent through his obituary at www.bergmortuary.com.

The family of John Earl Mitchell created this Life Tributes page to make it easy to share your memories.